It’s that time of year again, “the season with clear skies and stout horses.” Nothing depicts fall in Korea more accurately than this old saying.

During the fall, the weather is at its prime with the perfect combination of sunshine and cool breeze. Additionally, the harvested crops are so plentiful that even livestock get to enrich themselves, so what’s not to like about this peaceful season?

Besides the beautiful scenery on the street and the smell of pumpkin spice and roasted chestnuts, there’s another reason why we anticipate fall…it’s the time of Korean Thanksgiving, also known as “Chuseok“!

Chuseok is a harvest festival that the whole nation celebrates together. Many scholars claim that it originates from the shamanistic worship ritual of giving thanks to the harvest moon and ancestors. Farmers would show their gratitude and pay homage to their ancestors by presenting them with their new harvest, believing they would spend the coming winter with warmth and plenty of food and have a rich harvest for the coming year. They would then share their food with friends, family, and neighbors.

Nowadays, it’s a time when people take a break from their busy lives to head home and spend time with their family and friends. As a result, airports, trains, and roads are packed as people return to their hometowns. There’s even an expression for such a phenomenon, the “mass migration of Chuseok“. So if you plan to travel anywhere during Chuseok holiday, make sure you book your tickets way ahead of time or you’ll be headed absolutely nowhere. 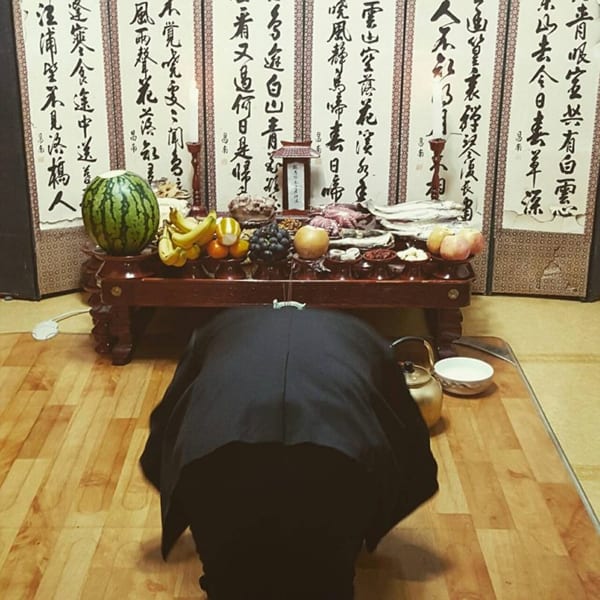 “Charye” is an ancestor memorial ritual that has been carried out for thousands of years in Korea. On the morning of Chuseok, family members gather in their homes to hold a memorial service for their ancestors, usually up to around four generations above (Chuseok would probably be over if they tried to pay their respects to every single one). During the ceremony, food, fruits, and beverages are offered to them. Each dish has a designated spot on the table and there are set processes such as lighting candles before alcohol is poured into three different cups and bowing twice afterward.

On the morning of Chuseok, family members gather in their homes to hold a memorial service for their ancestors, usually up to around four generations above (Chuseok would probably be over if they tried to pay their respects to every single one).

During the ceremony, food, fruits, and beverages are offered to them. Each dish has a designated spot on the table and there are set processes such as lighting candles before alcohol is poured into three different cups and bowing twice afterward. After the ceremony, everyone sits together to enjoy the delicious food they prepared and used for the ceremony as they reunite and bond with their family members.

2. It’s Not a Festival Without Food!

No food, no party. That’s the universal rule.

Chuseok is no exception. Preparing the delicacies is a lengthy process that involves many hands due to the quantity and variety of foods to be made. The food is meant to serve the ancestors. Therefore, Koreans believe that the more effort you put into making it, the more respect you are paying for them. 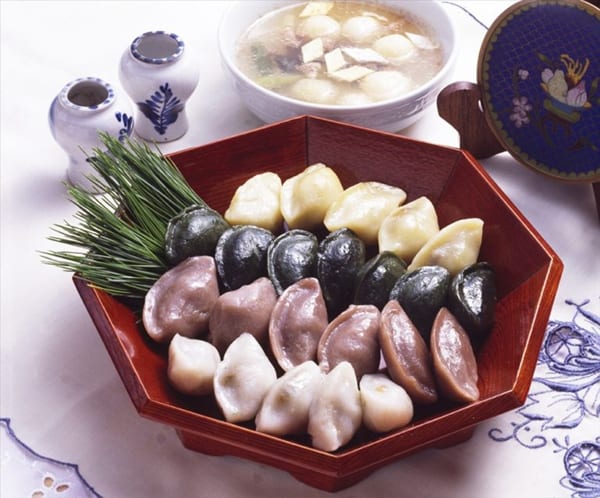 When it comes to Chuseok specialties, it would be blasphemous to leave “Songpyeon” off the table.

This crescent moon shaped rice cake is made with rice from the first harvest of the year, filled with beneficial ingredients such as powdered sesame, red beans, brown sugar, and chestnuts. The finishing touch is a fragrant pine scent, achieved by layering the cake with pine needles.

Though Songpyeon used to be made solely by women, nowadays the whole family participates. And ladies, take note! There’s a belief that a person who makes Songpyeon in the prettiest shape will meet a great spouse and have a beautiful baby, so make it count! 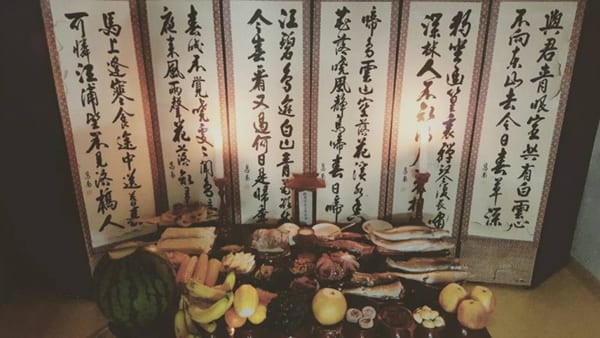 Besides Songpyeon, various other foods and fruits are served during the festival. Seasoned vegetables, pork, beef, and fish are common and the remaining choices vary by region.

For instance, in the northern part of Gyeongsang province, dried shark meat called Dombaegi and octopus are served because their main harvest is seafood.

It’s quite interesting to see the variety of foods in different regions, so do give them a try if you have the chance!

If you want to try making beautiful rice cakes filled with sweet bean filling or sweet rice puffs, book this class in Seoul! You will get to experience a unique artistic experience and take home your work of art as a souvenir.

So you’ve filled your stomach with delicious food and spent hours chatting with your family members. Now, it’s time to relax… NOT! The real fun now begins.

There are many fun traditional activities that await you, so get up and prepare to have fun! 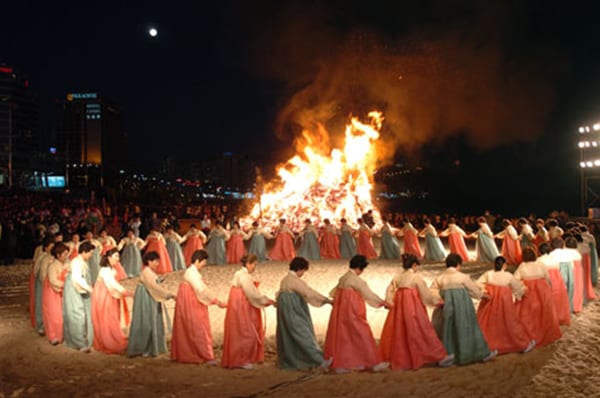 This nearly impossible-to-pronounce dance is traditionally done by women to pray for a bountiful harvest.

They come together under the brightest full moon, forming a circle as they hold each other’s hands. As the lead singer starts singing, the rest sing the refrain “Ganggangsulae” as they rotate clockwise. The dance gets faster and faster as the tempo speeds up and can last until dawn.

No one knows the exact origin, but many people claim the dance dates back to the 16th century when the Japanese attacked Korea. Naval commander Yi Sun-shin ordered the women to circle the mountains in military uniform to scare the enemy off, in an effort to deceive them into thinking the Korean military was greater in number than it actually was.

If you’ve never seen the dance, it’s quite interesting and exciting. Better yet, why not join in! 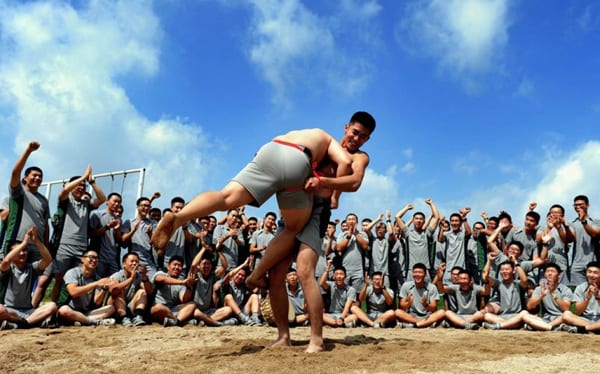 “Ssireum” is a traditional sport in Korea, composed of two opponents who wrestle while holding each other’s belts, called ‘Satba (샅바)’.

To win, the player must bring his opponent down to the sandy ground. Unlike Japanese Sumo wrestling, pushing the player out of the circle does not signify victory.

The biggest contest is held during the festival, its popularity scale comparable to American football on Thanksgiving as many families enjoy watching the games on TV.

Traditionally, the champion of the contest receives a bull and rice as the victory prize along with earning the title of being “the world’s strongest man”. He’s definitely not someone you want to mess with. Can you imagine what an honor it would be for a man to be called the world’s strongest and to bring home a bull in one hand and a bag of rice in the other? There is no written record of its origin, but bullfighting has been done traditionally over many centuries. However, Korean bullfights don’t involve much blood or killing at all.

Instead of humans fighting bulls like in Spain, it’s literally just two bulls fighting each other. So if you’re an animal lover, don’t worry as you won’t be seeing anything gruesome. As a matter of fact, the bulls are treated with lots of love and affection. The trainers take care of them in a respectable way, feeding them gourmet meals after training.

The show isn’t all about competition. Rather, it’s to show how well their livestock have been raised. In a contest, these thick-necked bulls butt heads until one eventually give in. A dual can last a few minutes or even hours.

Cheungdo is the city well known for its annual bullfight festival, with its own exclusive stadium that holds various events related to bullfighting. The event draws thousands of tourists every year. If you’re interested in this unique traditional and exciting event, you should try a visit to Cheungdo this Chuseok.

More Things to Enjoy During Chuseok!

If you’re stuck with nothing to do during Chuseok because your family is abroad, don’t stay at home moping. Head outside as there are still many things to do!

You can book Everland 1 day pass instantly on Trazy and simply show your QR code ticket on your phone when entering!

Wherever you are and whatever you’re doing, we hope you spend the best time during Chuseok holiday! And don’t forget to stop by Trazy.com to stay updated on the latest events and fun things to do in South Korea.