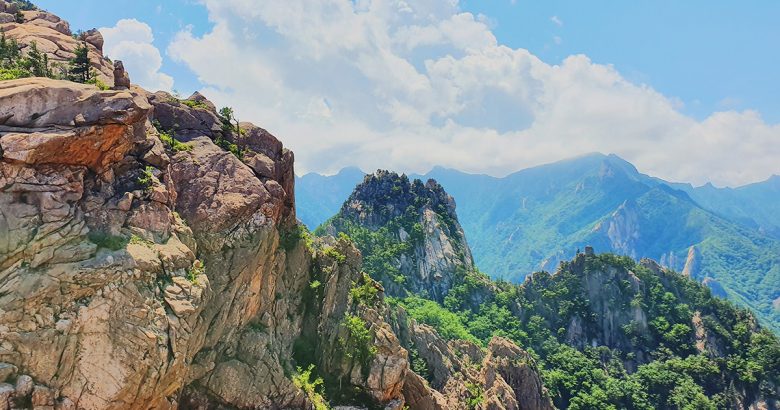 South Korea is known for its mountainous terrain. A lot of the mountains display magnificent scenery, especially during the spring, autumn, and winter seasons. Several of these beautiful mountains and areas are designated national parks in South Korea, which are well protected and maintained in order to preserve its beauty. Read on and discover our pick of 5 marvelous national parks in South Korea and plan a visit to them for your next trip to Korea!

National parks are very rarely within a city, yet Bukhansan Mountain was designated as South Korea’s 15th national park in 1983. The national park is like an ecological island because it’s totally surrounded by urban areas, but it still serves as the lungs of the urban environment. It’s accessible from anywhere in the Metropolitan area thanks to the convenient road system. With around five million visitors each year, it’s listed in the Guinness Book of World Records as the “Most Visited National Park per Unit Area”.

Bukhansan National Park has dozens of gorges and peaks with crystal clear streams flowing between them, creating a beautiful harmony between mountain and water. There are more than 1,300 species of flora and fauna. In addition, there are also many historical and cultural sites including Bukhansanseong Fortress with over 2,000 years of history and over 100 Buddhist temples. In short, it’s an educational site for learning about ecology, culture, and history.

You can try hiking up to the peaks of Bukhansan mountain with a friendly local host! Just decide the appropriate hiking route for you and off you go!

In 1970, Seoraksan Mountain was designated as South Korea’s fifth National park, and in 1965, it was designated as a natural monument. The name “Seoraksan” was given to the mountain because of how white the mountains become when there is snowfall. the snow falls not just on the peaks, but the entire mountain. Individually, ‘Seol’ means ‘snow’ and ‘Ak’ means ‘big mount, put them together you get ‘Snowy Big Mountain’. Including its main peak, Daecheongbong, Seoraksan has a total of 30 imposing peaks spread across its territory.

Seoraksan Mountain is popular among hikers, especially during winter, because they don’t want to miss catching a glimpse of the marvelous scene of the snowy mountains.

You can also go on a hiking tour to Seoraksan National Park, you’ll get a choice of four different courses, each a different difficulty. Each course is unique and beautiful in its own way. Have a go if you’re up for the challenge!

Don’t miss out on the chance to see the stunning autumn foliage scenery at Seoraksan Natinonal Park in fall!

In winter, visit Seoraksan National Park along with the best ski resorts in Korea!

Deogyusan was designated as South Korea’s 10th National Park in 1975. It lies in the Baekdudaegan (Backbone mountain ridges of Korea). Deogyusan National Park nests Gayasan in the east, Naejangsan in the west, Jirisan down south, and Gyeryongsan and Songnisan to the north.

Depart on a hiking tour to the most picturesque spots in Deogyusan and take in the view of Seolchangbong, one of the mountain peaks. Don’t forget to drop by Maisan Mountain to have a look at the beautiful temple!

Naejangsan was designated as South Korea’s 8th National park in 1971 and is one of five representative mountains of the Honam region. It also is one of the eight most beautiful places in South Korea. With Sinseonbong being its highest mountain peak at 763m, most of Naejangsan’s mountain peaks average at 700 m. However, each peak is unique in its own way, the rocks n each peak is different, gaining the name “Geumgang of Honam”.

Originally Naejangsan was named “Yeongeusan” after its main temple in the mountain, “Yeongeunsa”. However, the name was changed to Naejangsan because it was said that the mountain is full of hidden wonders, yet to be discovered. The meaning of the letters being Nae: inside, Jang: conceal.

How about searching for more of the hidden wonders in Naejangsan along with some other national parks yourself?

Gyeongju National Park is the only national historic park in Korea, being designated as the second national park in 1968. The park is divided into eight sections over several districts, with some of the most famous World Heritage sites in multiple areas. Gyeongju is a living history book with well-preserved relics of the Silla dynasty, in harmony with the natural scenery. In 1979, UNESCO listed Gyeongju as one of the 10 most important historic sites in the world.

Even now, relics are being excavated and even some remain undiscovered to this day. Some of the famous Heritage sites include Bulguksa Temple and Seokguram Grotto in the Tohamsan district. There is also the famous Cheomseongdae Observatory in the Sogeumgang district, and many more spread out all over Gyeongju!

Gyeongju, a.k.a the ‘museum without walls’ is full of majestic heritage sites, and is a great opportunity to learn about the history and culture of ancient Korea, check out this one of a kind opportunity to visit Gyeongju!

National Parks in South Korea are absolutely stunning to visit, so if you’d like to find out about more national parks, check out Trazy.com, Korea’s #1 Travel Shop!

What’s the Best Way to Go to Nami Island from Seoul?

14 Best Day Trips from Seoul Based on Your Personality