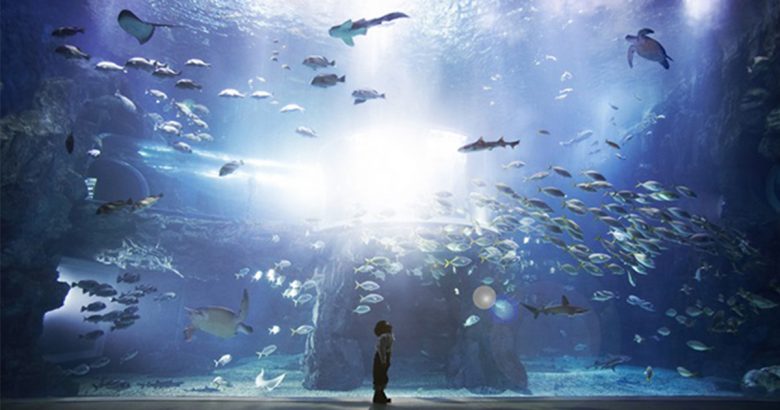 The ocean is beautiful, boundless, quiet, and fresh in golden color, and the sea breeze always makes you feel calm. However, it is so mysterious to explore; it’s sometimes shy, but sometimes roaring like a lion. Thanks to the well-known animation, Mermaid, which depicts the underwater world of the sea, gives people more room for the imagination of marine life. Visiting an aquarium is the easiest way for people to find out the secret of the ocean.

If you are taking a trip to Korea and want to add some more fun to your itinerary, read on this blog! We’ve compiled a list of the best aquariums in Korea!

Coex Aquarium is one of the largest aquariums in Korea. It showcases over 40,000 creatures from over 650 species. Visitors can follow the preset path of Water Travel to experience the underwater world. One of the must-sees here is the sharks! The COEX Aquarium houses more than 17 kinds of 110 sharks! Also, don’t miss out on the Fish in Wonderland, where displays a collection of eccentric fish tanks, including a refrigerator, phone booth, and more. The Deep Blue Sea Tunnel is a popular filming location of K-dramas where you can walk in an acrylic tunnel, experience living under the sea as the sharks, stingrays, sea turtles, and more swim around you in all directions. If you like traditional Korean vibes, go to the Garden of Korea. Hanbok rental is available!

🐟Get a COEX Aquarium Discount Ticket

[Things to do around COEX Aquarium]

Lotte World Aquarium dreams of a happy world where humans and nature live in harmony. It houses 55,000 marine creatures with 650 species from the five oceans. The aquarium creates the same inhabited environment for the creatures as their new home. Also, it offers various programs for visitors to learn and know more about the ocean at a nearer distance. For the features, it has the largest water tank in 25-meter-wide. Besides, this is the only aquarium in the city where you can see the friendly belugas.

[Things to do around Lotte World Aquarium]

Aqua Planet 63 locates in the iconic 63 building, which offers a bird’s eye view of Seoul City at the world’s highest gallery. Same as other Aqua Planet aquariums, it aims to demonstrate a variety of marine ecosystems not seen in everyday life, teach the value of marine culture and suggest ecosystem preservation. It features 20,000 sea creatures of over 400 species. One of the highlights here is the living fossil, Coelacanth, which was once thought to be extinct. In addition to the beautiful marine creatures, the aquarium offers a must-see mermaid show. Make sure you check the showtime and save a great spot in front of the main tank to admire stunning mermaid swim in the undersea world!

[Things to do around Aqua Planet 63]

Sea Life Busan Aquarium is one of the best aquariums in Korea located in Haeundae Beach. It has about 250 species and up to 35,000 marine animals on display. With the 8 open halls that display various kinds of animals, you can explore the ocean world! The aquarium features Transparent Boat, which is the only 180-degree ocean glass tunnel in the country that you can experience sharks and other creatures swimming under your feet. Additionally, for those who want to get close to marine creatures, you can see sharks, otters, and penguins being fed! The fashion zone which showcases undersea fashion week is one of the popular attractions as well.

[Things to do around Sea Life Busan]

Located on the 9th floor of Sinsegae Department Store, Daegu Alive Aquarium is full of fun! You get to experience unique facilities like no other in Korea, such as ‘Daegu Sea Cloud Bridge,’ ‘360-Degree Sunroof Aquarium,’ and ‘Ocean Maze.’ The amazing shows and performances, including animal stories, feeding shows, magic performances, mermaid shows, are also one of the attractions you should not miss out on! Besides, for more interactive experiences, you can feed land animals like rabbits, otters, and turtles.

[Things to do around Daegu Alive Aquarium]

If you are planning to go to Jeju Island, you must visit Aqua Planet Jeju! It is the largest aquarium in Asia. Moreover, it’s ranked as the world’s top 10 aquariums. It houses approximately 48,000 sea animals from around 500 species and owns a world-class scale main water tank. The aquarium features educational, cultural, and entertainment performances. You can learn about the history of the female divers, Haenyo, which is one of the treasures of Jeju, and watch them plunge to a depth of 20 meters to collect seaweed and shellfish. Also, it offers an incredible musical performance, Ocean Arena Show. The Marine Science and the tunnel where you will feel like walking the bottom of the ocean are the popular attractions as well.

[Things to do around Aqua Planet Jeju]

Aqua Planet Yeosu is the second largest aquarium in Korea, with a record of about 1 million visitors every year. Around 34,000 marine organisms from 280 species are all gathered here. The rare animals such as beluga whale and Baikal seal are also on display. There are various shows, such as the mermaid show and feeding shows to watch. Besides, you can also experience sand art and candle making! Additionally, the Alive Museum that displays highly convincing optical illusion arts in the theme of nature can also be visited optionally.

💎Have fun at Aqua Planet Yeosu

Aqua Planet Ilsan is easily accessible from Seoul via public transportation and it houses an exceptional variety of species from fishes, sharks, and penguins to monkeys, goats, and ponies! You can meet and interact with land and sea animals from all over the world through the numerous daily educational programs along with feeding shows and interactive musicals. You can also get a 10% discount for meals at the food court with the ticket!

Here are the best aquariums in Korea that we picked for you. By visiting an aquarium, you can not only appreciate the beauty of marine creatures but also acknowledge the importance of preserving nature and aquatic life. Don’t forget to visit one of the above next time you visit Korea! For more trendy spots and information about Korea, check out Trazy.com, Korea’s #1 Travel Shop.

The Five Grand Palaces in Seoul You Should Visit

The 10 All-Time Favorite Parks in Seoul Among Seoulites

12 Best Water Activities to Try in Jeju Island in Summer