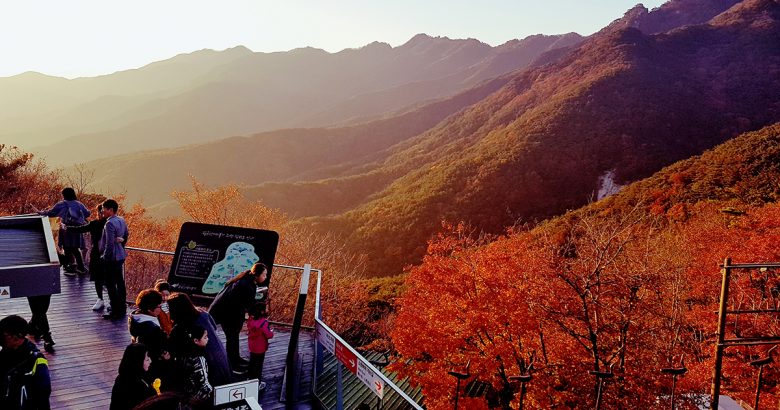 Beaches, ice creams… It’s finally time to bid the long scorching summer goodbye and welcome the chilly fall weather. Famous author Jim Bishop once said, “Autumn carries more gold in its pocket than all the other seasons”. Throughout October and November, you can feast your eyes on lush mountains dyed with scarlet-tinged leaves in 5 breathtaking fall foliage trails in South Korea: Seoraksan National Park, Naejangsan National Park, Odaesan National Park, Songnisan National Park, and Daedunsan Mountain. These sights all offer spectacular foliage scenes and worthwhile hiking experiences. So, prepare to immerse yourself in the beauty of Autumn at the fall foliage trails we suggest!

Known for its beautiful scenery all year round, Seoraksan National Park is the starting point of fall foliage in Korea. Located in the northeast of Korea, the park spreads across Gangwon Province. It is an extremely popular hiking destination during the autumn season, with throngs of people gathering to watch the leaves change color. Around the middle of October, the foliage will reach its peak in the park, boasting magnificent views of the mountains colored yellow, reddish-gold, and orange.

To enjoy the autumn tints here to the fullest, we highly recommend the following two trails: 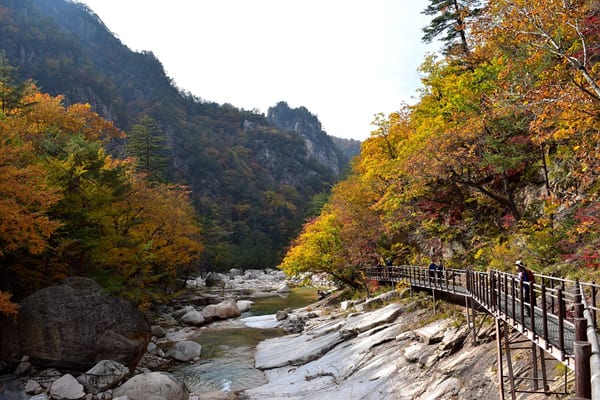 Baekdamsa Temple is one of the beloved trails you can take from Seoraksan, a very popular destination within the mountains. The trail here is narrow and winding, but it’s well worth it as it is a beautiful temple, known for its scenery that embodies an old history tracing back to the Silla kingdom (B.C.57~935). There are streams and valleys nearby as well that add more beauty to the scenery, complete with crisp blue skies and a gentle cool breeze. 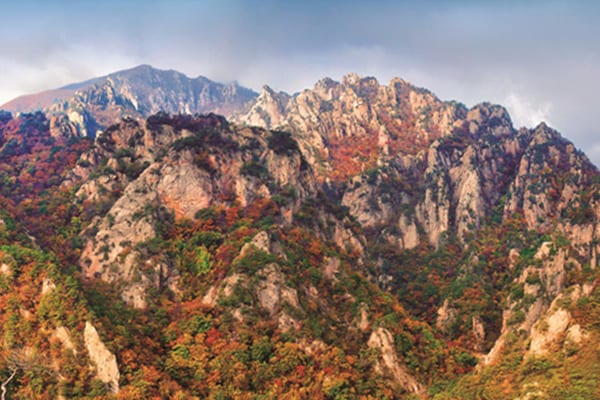 The second trail is from Seoraksan to Ulsanbawi, a massive rock standing at 876m that provides a spectacular view. Hiking up these granite peaks is no easy task, with the last section involving a steep flight of 800 steps that can be especially difficult to climb in strong winds. But don’t give up, because once you reach the summit and gaze upon the panoramic view, you’ll realize the pain and suffering were all worth it.

Besides the foliage, Seoraksan boasts colossal mountain peaks that pierce through the clouds, dense rocks, gorging valleys, and cascading waterfalls that are sure to be magnificent. 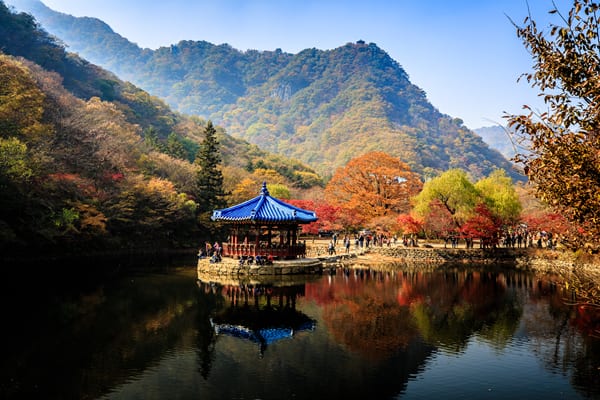 The next foliage destination that you could visit in South Korea is Naejangsan, located in Jeolla Province. This place is particularly famous for its vivid crimson foliage, 600-year-old nutmeg trees, and famous waterfalls such as Dodeok Falls. There are also two famous temples to explore called Baekyangsa Temple and Naejangsa Temple.

Temples, mountains, plants, animals, waterfalls … Naejangsan has an endless list of things to offer so you’ll never be bored. There are incredible views every season, such as cherry blossoms in the spring, greenery in the summer, and trees covered with snow in the winter. 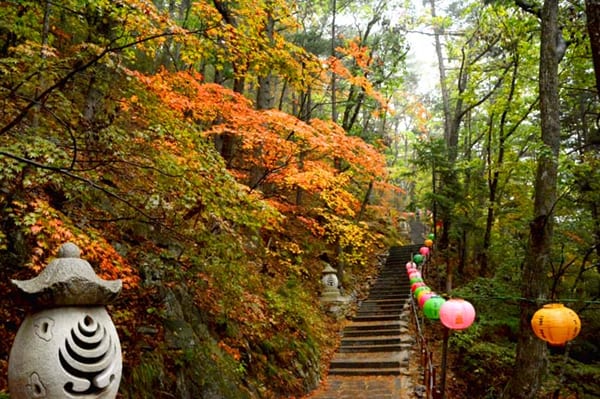 Known for its beautiful thick forest of fir trees, Odaesan National Park was used as a location of the hit Korean drama, “Goblin,” starred in by Gong Yoo and Kim Go-Eun. The nearby Woljeongsa Buddhist Temple, located in the valley east of Mount Odaesan, founded in 643, is another stunning site to take in the autumn foliage.

Songnisan National Park was designated as the sixth national park in Korea. As the name of the mountain translates into ‘renounce the world’,  you will forget the world once you enter Songnisan Mountain, overwhelmed by its beauty. The eight peaks are curved like arrows around Cheonwangbong (1,058m) in the south. 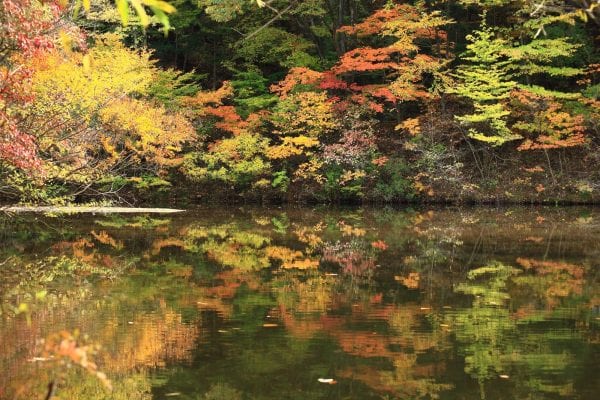 Beojusa Temple, located in Songnisan National Park is a place where you can see the only traditional wooden pagoda in Korea. The five-story wooden pagoda and a majestic hanging painting reveal its greatness as an old relic. The temple was built during the Silla Dynasty and was designated as the UNESCO world heritage, recently in 2018. 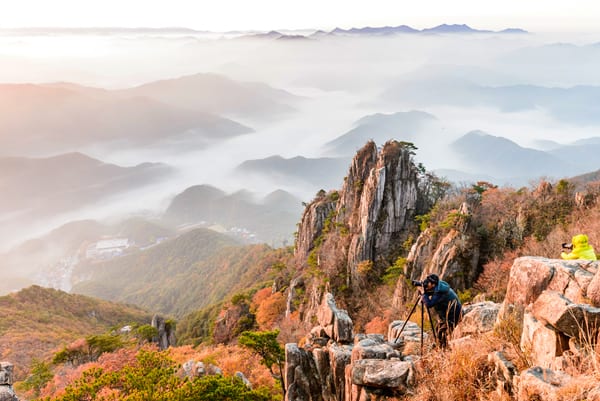 Daedunsan, at 878 meters, is known for its steep and rocky landscapes and is one of the most challenging but worthwhile mountains to climb. Characterized by large rocks and trees, the main attraction is a hair-raising suspension bridge that hangs over a deep ravine 300 meters above sea level. Cross it if you dare! We can assure you that it’ll add an element of thrill and excitement to your trekking, especially on a windy day when the bridge sways from side to side.

However, for those of you who don’t want to cross the bridge, you can ride the cable car instead! Aside from the thrills, Daedunsan is full of maple leaves that are a dazzling red spectacle from above. 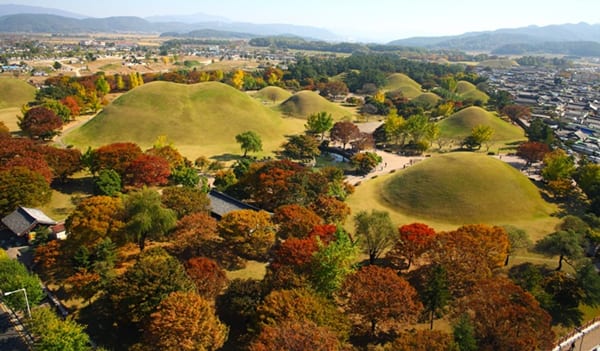 National Parks aren’t the only place you can see leaves turn red. Gyeongju is one such place, which is an area abundant of historical heritage sites. Not only will you be able to witness the trees don warm tones of yellow, orange, and red, but you get to see numerous UNESCO World Heritage sites such as the Bulguksa Temple, or walk around Gyeongju wearing the Korean traditional hanbok. 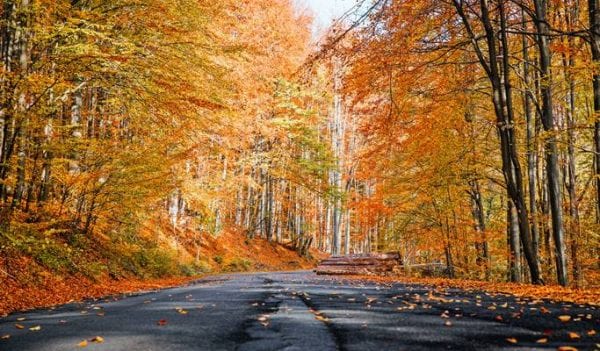 Jeju Island is a magical island 4 seasons of which are clear and have its own beauty. With the help of blessed nature, you can spot the most awesome appearances of fall in Jeju fall foliage trails. Do not miss a chance to witness the magic of colors in the Korean treasure island! 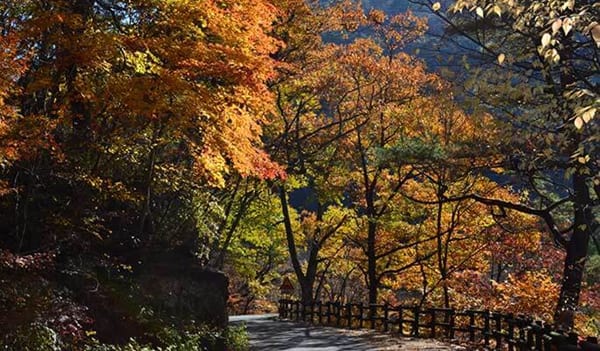 Walking along the fall foliage trails in Korea is definitely a special travel experience! As always, do not forget to stop by Trazy.com, Korea’s #1 Travel Shop, to stay informed on the latest and best things to do in South Korea!