Skip to content
Getting Around Thailand Thai Culture & History Thailand Thailand is a nation known for its extravagant history that dates back to the 13th century. Many sites of the old kingdoms are well-preserved and have transformed into must-visit historical sites that show you a glimpse into Thailand’s past. Some of them are even listed as UNESCO World Heritage sites, recognized for their cultural and historical significance by the international community. To help you out with your Thailand travel itinerary, we will introduce a few historical sites in Thailand on this post! We will also present a brief chronology of the Kingdoms of Siam to help you get started in learning the history of Thailand. The Sukhothai Kingdom is the first kingdom that was established within the present-day borders of Thailand. It was formed in 1281 and lasted for two centuries. Currently, the site on which the kingdom existed is designated as a UNESCO World Heritage Historical Park for having been the first to have developed and defined the characteristics of Siamese (Thai) culture. Many believe that the Wat Mahatat was the religious center of the Sukhothai Kingdom. The most notable attraction of Wat Mahatat is the towering main chedi in the middle of the temple. The grandness of this temple will teach you how significant the spiritual center of a kingdom was.

Sukhothai is about a 4-hour drive from Chiang Mai. If you would like to witness the remains of Thailand’s beginning, taking a private taxi that will take you from Chiang Mai to Sukhothai safely and comfortably is highly recommended. 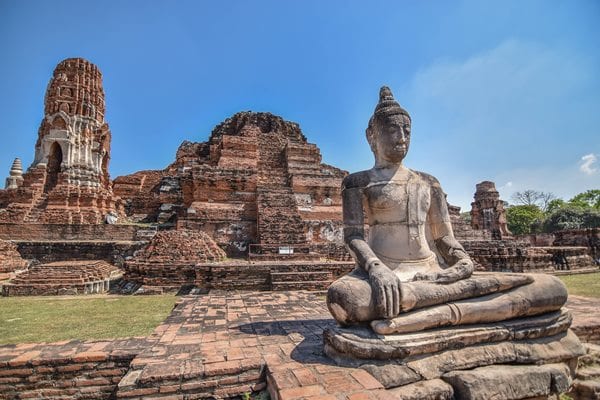 In the 14th century, the Ayutthaya Kingdom rose to dominance. It flourished for about four centuries before its dramatic fall. The city that fell down was never reconstructed and therefore, this historical site remains a massive archaeological site. Due to the many lasting remains in the city, Ayutthaya is also listed as a UNESCO World Heritage site alongside Sukhothai.

Ayutthaya is situated north of Bangkok and therefore is easy to get to for those staying in Bangkok. The must-visit places when visiting Ayutthaya are mainly the temples that have lasted through centuries. By visiting the temples, you will get a good sense of Ayutthaya’s prosperous past.

One of the most famous temples is the Wat Mahathat, which served as the epicenter of the kingdom. At this temple, you will find a peculiar scene of a Buddha’s head trapped in a tree trunk. Another famous temple is the Wat Phra Si Sanphet, a temple used exclusively by the royal family of Ayutthaya. Wat Phra Si Sanphet later served as an inspiration for the famous Wat Phra Kaew in Bangkok.

Since there are many ruins in Ayutthaya with an extensive background, we advise you to go on a tour with a guide who knows all about Ayutthaya’s rich history. Check out some of our recommendations below!

The Rattanakosin Kingdom was the fourth Siamese kingdom. It was also the kingdom that positioned Bangkok, the current capital of Thailand, as the center of the nation. Therefore, many historical sites in Bangkok, especially those in the Old City district, are from the Rattanakosin era.

A lot of the most notable sites are again the temples of the city. However, possibly the most famous historical attraction site is the Grand Palace. After being crowned, the first king of Rattanakosin, King Rama I ordered the construction of the Grand Palace in 1782.  Although the monarchs stopped living in the Grand Palace from 1925, this exquisite building is still used for royal ceremonies. Due to the significance of the Grand Palace during this era, many monumental temples are within the Grand Palace complex. Wat Phra Kaew is regarded as the most important and sacred temple of Thailand. Also known as the Temple of the Emerald Buddha, this temple is the home to a jade Buddha statue that is recognized as the palladium of Thailand.

Because a lot of the significant historical sites from this time are located near the Grand Palace, it is easy to visit all of these attractions at once through a half-day tour.

Chiang Mai was the capital of the Lanna Kingdom for five centuries before the kingdom eventually became part of Siam, which later became present-day Thailand. Currently, the city of Chiang Mai is on the tentative list of becoming a UNESCO World Heritage site. If this happens, Chiang Mai will be the first to become Thailand’s first living heritage city.

One of the most sacred temples in Thailand is in Chiang Mai, built during the Lanna Kingdom. It’s called Wat Phra That Doi Suthep, although it’s often referred simply as Doi Suthep. As an acknowledged pilgrimage site, Doi Suthep has attracted many locals and tourists throughout the years. Not only that, Doi Suthep is loved for its beautiful architecture and the view of Chiang Mai from the temple. If you are visiting Chiang Mai, you should definitely visit this culturally and religiously important site. Apart from many historical sites in Thailand that possess an extensive history, the annual Yi Peng Lantern Festival is another interesting attraction in Chiang Mai that is known for its long-lasting ties to the Lanna Kingdom. Although the dates differ every year, the Yi Peng Lantern Festival usually occurs on the day of the full moon in November, which is the second month on the Lanna Calender. On this day, many locals gather to light paper lanterns and send them off to the sky to let go of negativities and bad luck. At the festival, you will see thousands of well-lit paper lanterns fill up the night sky. It’s truly a scenery that is extremely hard to come by.

While many historical sites in Thailand we have introduced were established on the grounds of prosperity, Kanchanaburi is different. Kanchanaburi, a town in the west of Thailand, faced terrible tragedies during the Second World War. Many places in the town still carry the pain from this era.

During the Second World War, the Japanese took control of Kanchanaburi and forced many captured prisoners of war (POWs) to build the Death Railway. If it had been finished, it would have connected Thailand and Burma (present-day Myanmar). The working conditions were absolutely brutal and led to the deaths of about a quarter of the POWs. In 1957, a film about this deadly construction called The Bridge Over the River Kwai was released and won seven Academy Awards, including Best Picture. Since then, many tourists have set foot in Kanchanaburi to grasp what the lives of the POWs must have been like and to commemorate those who died serving for their country. Many notable historic sites in the region are the Bridge over the River Kwai, the Hellfire Pass, the JEATH War Museum, and the Kanchanaburi War Cemetery.

Here are two tours that take you to these historic sites!

Whether a history enthusiast or not, you should definitely visit some of these historical sites in Thailand. You will have a greater appreciation for the nation after just stepping foot into these places. To make your visit to Thailand more insightful and exciting, visit Trazy.com and check out some of our other Thai products!