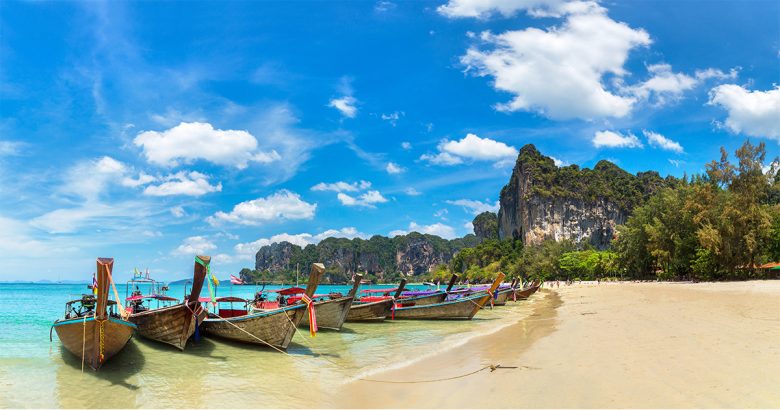 Thailand has been a beloved movie location. Why are so many movies filmed in Thailand? With its exotic atmosphere, low production costs, and various picturesque scenery, Thailand attracts movie makers to set and film. From the city scene with towering skyscrapers, shattering noise at local markets, and china town, to those glamorous islands, it has been used in movie locations for decades. We’ve compiled the list of the best movie locations in Thailand. Sound, speed. Camera, rolling. And…Action!

The Man with the Golden Gun (1974)  was filmed in and around Phang Nga Bay and spawned a whole new tourism attraction. Khao Phing Kan is a general designation of the limestone karst towers in Phang Nga Bay, northeast of Phuket. About 40 meters from the shores of Khao Phing Kan lies a 20-meter tall islet called Ko Tapu. Since 1974, when they were featured in the James Bond movie The Man with the Golden Gun, Khao Phing Kan and Ko Tapu have been popularly renamed as James Bond Island in honor of its backdrop performance. It has become a hit tourism attraction and is now always busy with travelers.

Hangover 2 was almost entirely filmed in Bangkok, except a little in Phang Nga Bay and Krabi. The movie locations from Hangover 2 that people visit most are Sirocco Bangkok and Sky bar. They are on the 63rd and the 64th floor of the famous Lebua State Tower, which offers an unbeatable 360-degree view all over Bangkok. If you plan to enjoy your night at these fabulous bars, don’t forget to order Hangovertini: a blended cocktail that created in honor of the film. There’s a room called THE HANGOVER PART 2 at Lebua State Tower now, it’s one of the movie locations. The movie also took place in a lot of spots in China Town. Why don’t you hunt more movie spots all around Bangkok?

The Beach is one of the famous movies shot in Thailand, including Khao San Road in Bangkok, Phi Phi Islands, and Phuket, starring Leonardo DiCaprio. Most of the scenes were shot in Maya Bay, the main beach of Phi Phi Islands. However, it attracted criticism claiming the film company had damaged the island’s environment because the producers planted imported palm trees to make the island look more paradise-like. Besides, with the film’s release, the islands came to worldwide and an increase in tourism. But every coin has two sides: a sharp rise in visitors had severely damaged the environment. As a result, unfortunately, the Thai government has decided to close Maya Bay until 2021 to protect the environment.

If you are a romantic comedy lover, then you must have heard of this movie! First Love, also known as Crazy Little Thing Called Love, is a 2010 local produced Thai film. The story depicts a 14-year-old girl who falls in love with her senior in tenth grade and tries desperately to win his attention. The producers chose Phetchaburi as the movie location. And the classic scene of leading characters sitting and chatting on the suspension bridge was filmed at Kaeng Krachan National Park, the largest national park in Thailand. The park is on the list of ASEAN Heritage Parks.

5. Death Railway: The Bridge on the River Kwai

The bridge on the River Kwai is an epic war film released in 1957, uses the historical setting of the construction of the Burma Railway, which is also known as Death Railway. It depicts British prisoners of war forced by the Japanese to build a bridge on the Thailand Burma Railway. The movie shot in Sri Lanka, but the actual bridge stands in Thailand. Besides, Death Railway is one of the famous attractions of dark tourism. The stretch from Bangkok to Nam Tok is still in use today, and you can ride regular passenger trains all the way, with the Bridge over the River Kwai.

Krabi is also one of the best movie locations in Thailand. The ninth edition of the famous Hollywood action film, Fast & Furious, filmed in Thailand, including Krabi, Ko Pha-ngan, Surat Thani, and Phuket this July. The film will star an ensemble cast: Vin Diesel, Michelle Rodriguez, Jordana Brewster, Tyrese Gibson, Chris “Ludacris” Bridges, Nathalie Emmanuel, John Cena, Helen Mirren, Charlize Theron, and Michael Rooker. This is the first time that Fast & Furious has used Thailand as a movie location. Krabi governor welcomed the franchise as it’s an opportunity for Thailand’s culture, history, and nature to be showcased to the world through the film. The movie brought in 340 million baht that benefited Thailand and the local film industry, using the local crew as support. The Fast & Furious 9 is going to be released in 2020.

Lost in Thailand is a 2012 Chinese comedy film about three Chinese men traveling in Thailand. Two competing scientists are searching for their boss, and a tourist eager explores the country. The box office performance was great, and it was the first movie in China that has earned over a billion yuan, overtaking Titanic. The movie used a lot of locations in Chiang Mai, including Wat Chiang Man, Thapae Gate, elephant jungle, and Wat Buppharam. Following the movie’s release, tourism from China to Thailand grew 60% in both 2012 and 2013. Some travel agencies even launched ‘Lost in Thailand Journey’ for tourists to go through all the scenes from the movie.

Read More About These Movie Locations:

Above are the best movie locations in Thailand. Are you ready for a trip to Thailand to experience a movie-like life? Find out more awesome places to visit in Thailand on Trazy.com, Asia’s #1 Travel Shop.