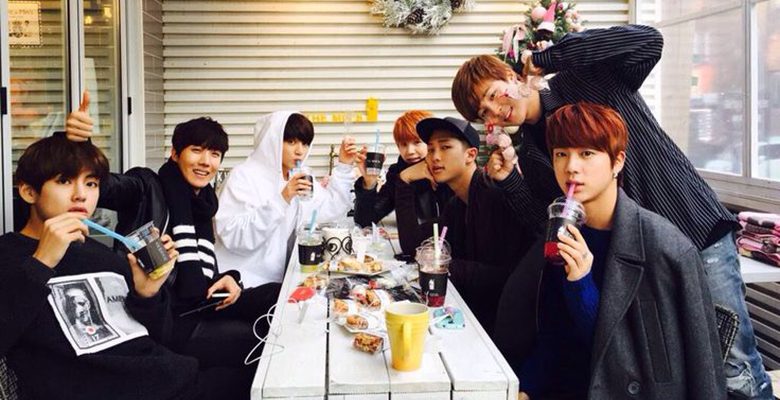 Rejoice every ARMY member out there who wants to check out our boys’ early history in Seoul! Now you can simply join Trazy’s BTS tour to retrace their early days in Gangnam.

Today, BTS is undoubtedly one of the biggest boy-bands, not only in Korea but in the world. However, they also had those days when they were on their grind to get where they are now. That’s why we all have so much respect for BTS, and it’s worth visiting the spots where we can see their history if you are a passionate fan.

Are you ready to check out their early days in Seoul? Let’s get started! 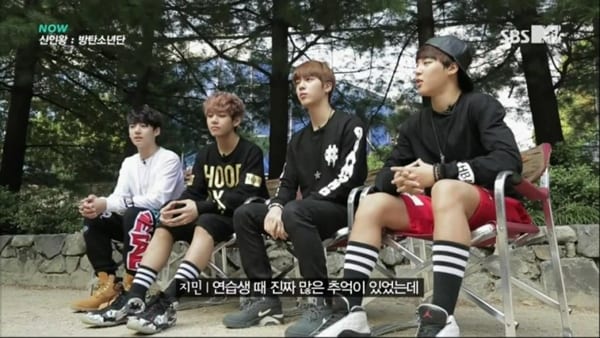 Hakdong Park is where the BTS boys used to spend their free time when they were trainees. They say they have countless memories there, as this park was only a few blocks away from their first house. 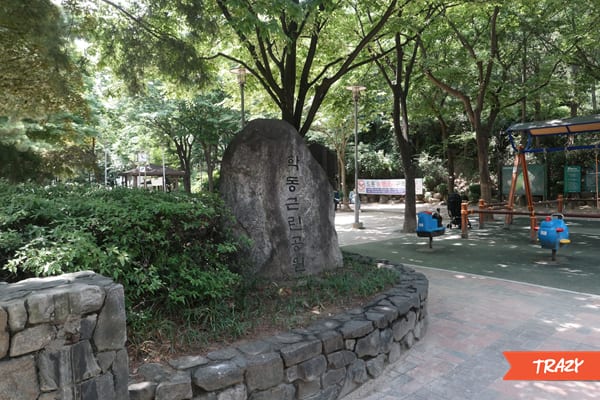 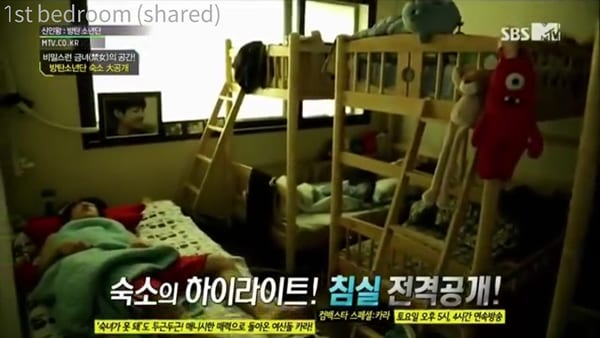 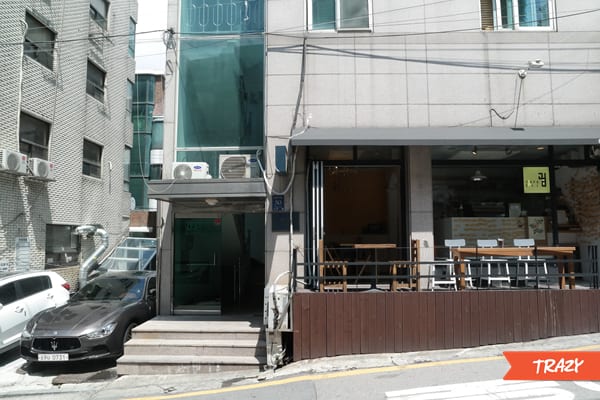 7 BTS boys used to live in this tiny apartment sized 56㎡ altogether. Unfortunately, we can’t look inside the apartment because there are other tenants living in the unit now. But we can look from the outside and see how they really started from scratch. 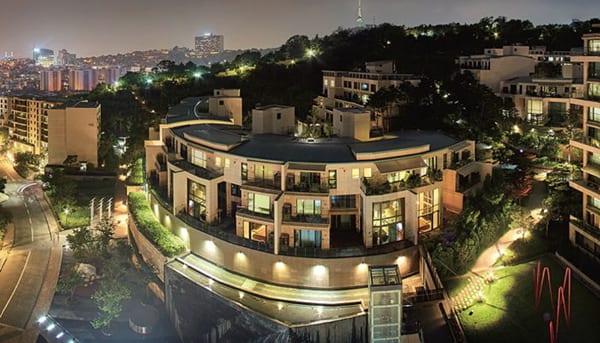 And, this is where they live now. This is allegedly the most expensive condo in Korea. Huge step up for our Bangtan boys, right? 😍 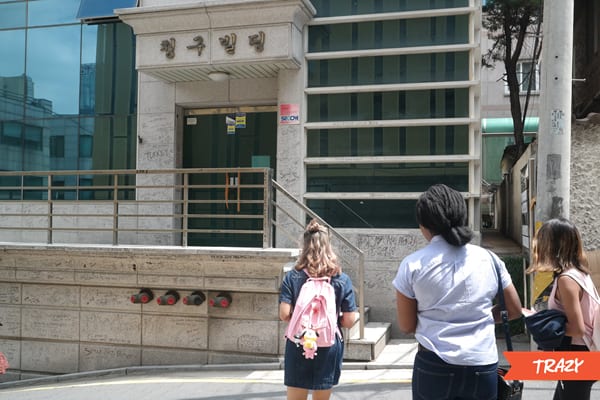 Not too far from their first house, you can find their first office building. It is hard to miss as the building is covered with fan scribbles. BigHit Entertainment is now at another location, but it is a rite of passage for the ARMY to visit here as this is where the “history” began for BTS. 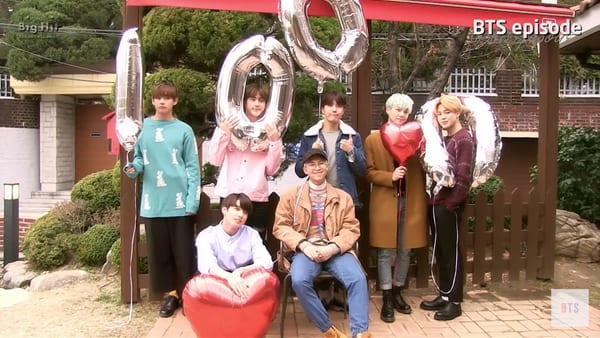 Illy Coffee Korea HQ office is where BTS filmed their 1000 days anniversary BTS TV episode. (Note: this is not a café, but an office building). It is on the way to the “Yoojeong Sikdang”, which was BTS’ favorite restaurant, so it’s worth checking out to take some photos. 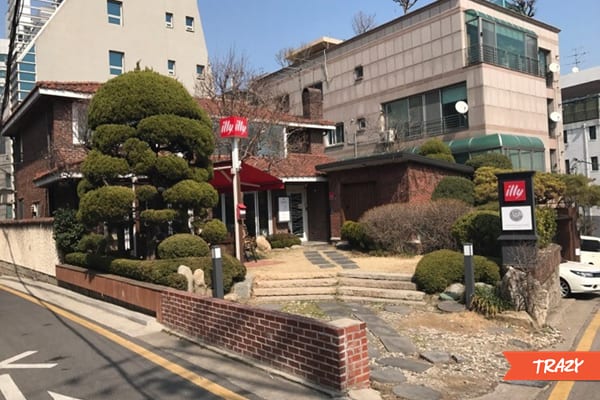 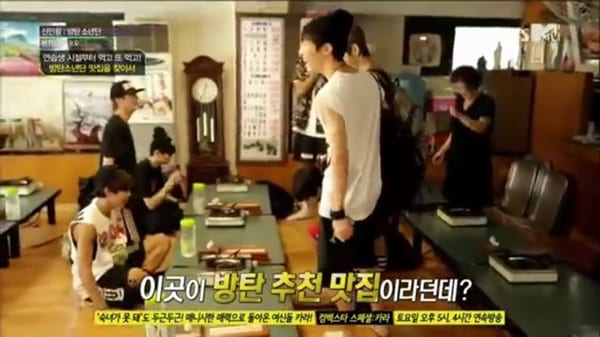 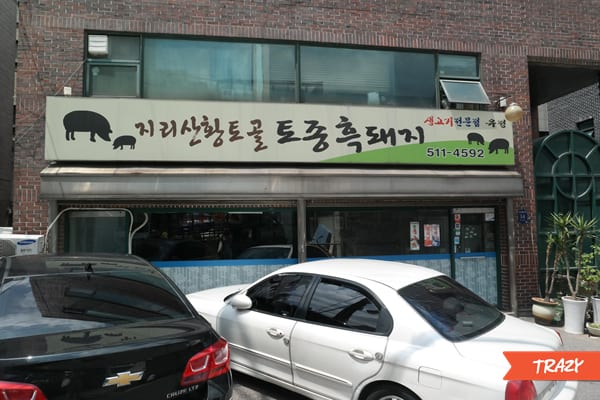 ARMY calls this place the Holy Land. Yoojeong Sikdang is BTS’ favorite restaurant. The basement of the restaurant building used to be their practice room, so the boys came to this restaurant very often. 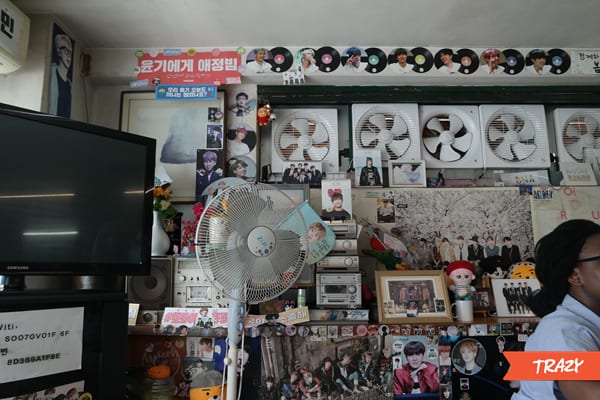 Inside the restaurant, you will see the walls filled with BTS signed photos and posters. 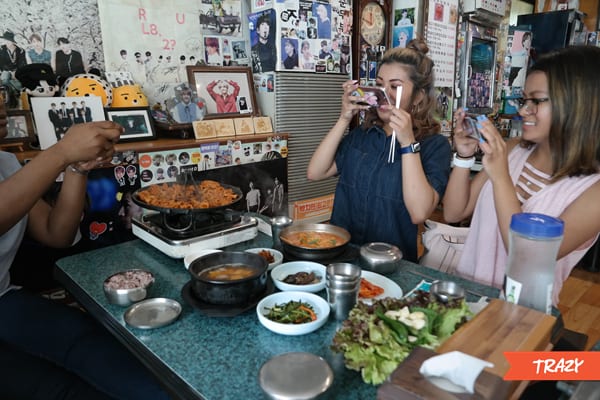 They offer diverse pork menu, and their most popular dish is “Black Pork and stone pot Bibimbap”, which was BTS’s favorite food! This restaurant is beloved not only by ARMY, but also a lot of locals as their food is actually very tasty! 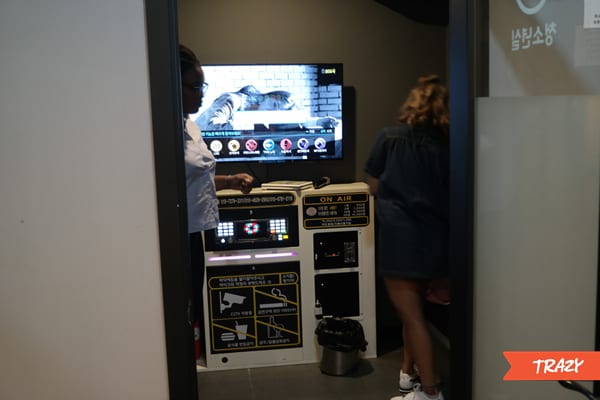 To make your day even more perfect, head to a Noraebang (karaoke) with your ARMY friends and sing BTS songs. For us, many BTS songs were hard to sing with their fast rap parts, but we still had a blast! 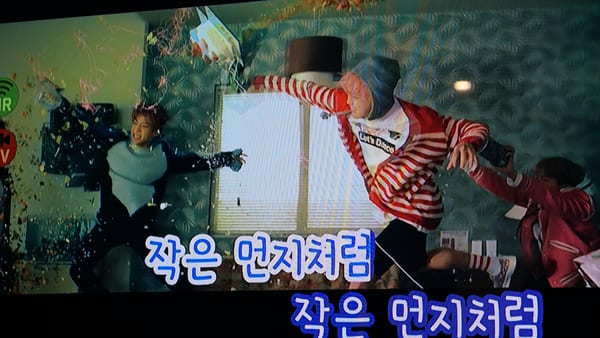 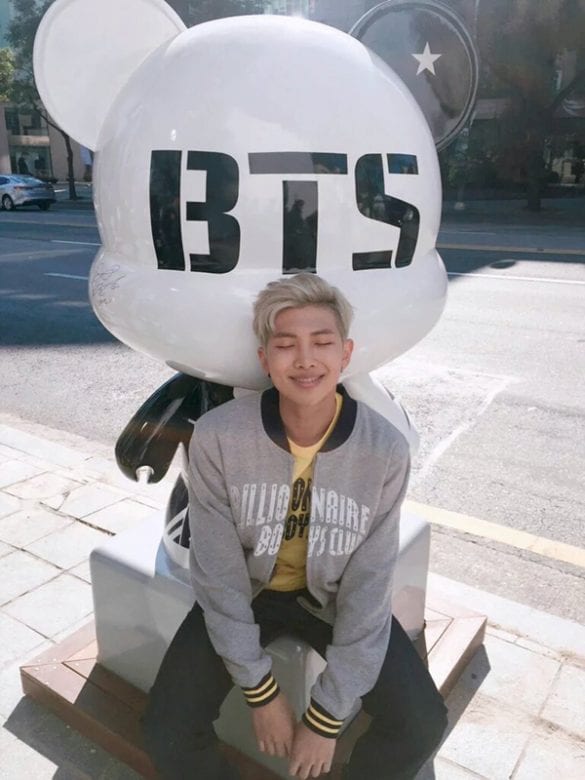 Now head to Apgujeong Rodeo to find the BTS doll. When you get off at Apgujeong Rodeo Station Exit 7, you will find the K Star Road with numerous K-pop artists’ signatures on the teddy bear statues. As an ARMY, you can’t miss the BTS teddy bear! 😍 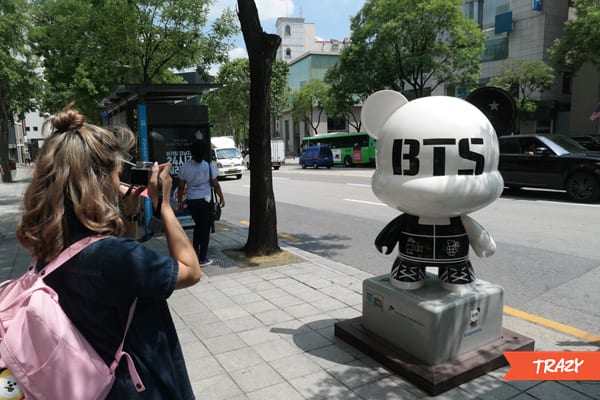 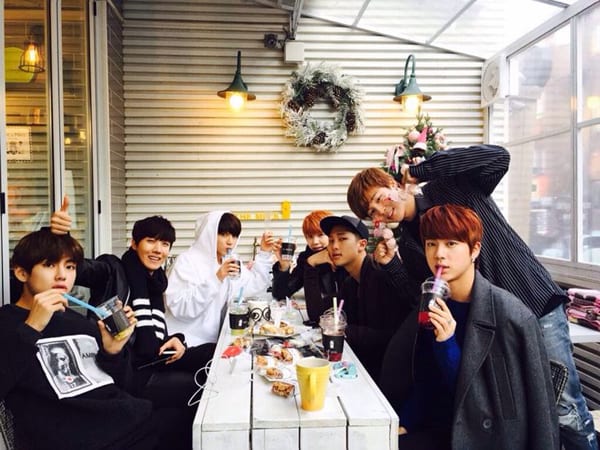 The Min’s café is owned by 2AM member Changmin as you can get the hint by its name. BTS and Changmin are very close to each other as they are part of the same record label (BigHit Entertainment). It is a known fact that BTS visited The Min’s café often, and you can find their pictures taken in The Min’s café everywhere! 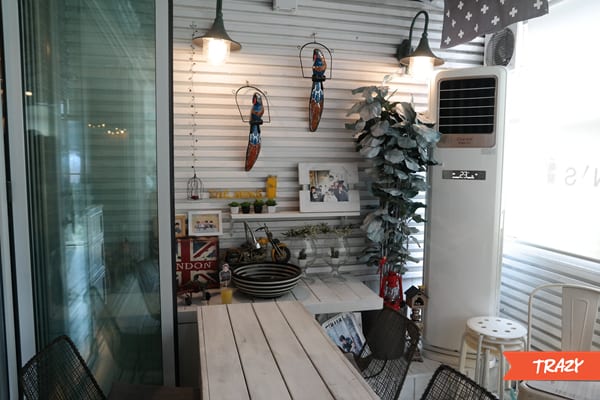 Sit at the table where they were, and also try their favorite menu! You will feel some special connection to BTS even more! 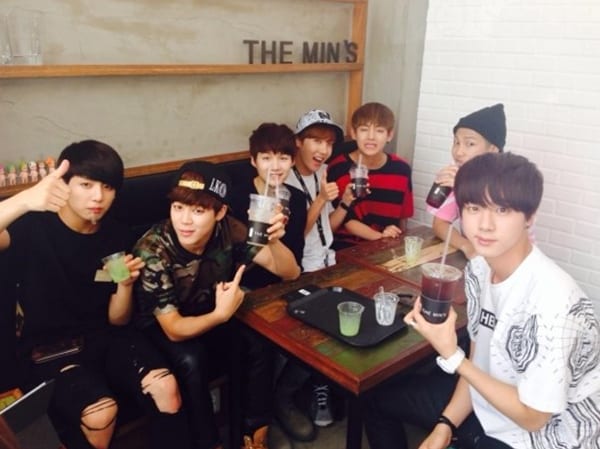 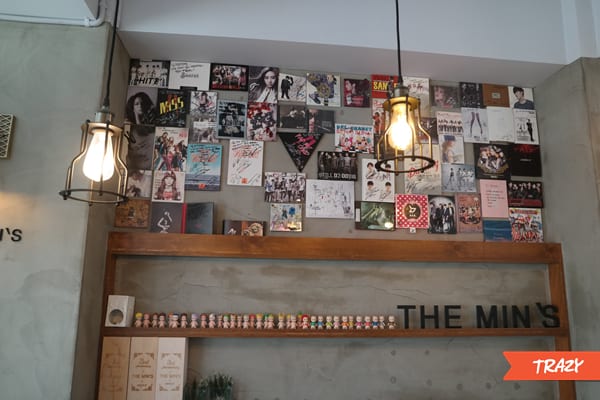 Do you want to visit all the places mentioned above without any hassle and have more fun with a passionate guide whom you can chit and chat about BTS the whole time? It can be difficult to figure out how to get around the area as it involves a lot of walking, and it is definitely a confusing area to navigate on your own.

But don’t worry, you can simply join our BTS tour and visit all these places with no trouble. Our ARMY guide will take you through BTS’ favorite places while giving you interesting “Behind the Scene” stories about BTS. (No pun intended 😜)

Last but not least, don’t forget to visit Trazy.com, Korea’s #1 Travel Shop, for more activities and travel ideas for your holiday to South Korea!