Skip to content
Busan Popular Attractions Getting Around Korea 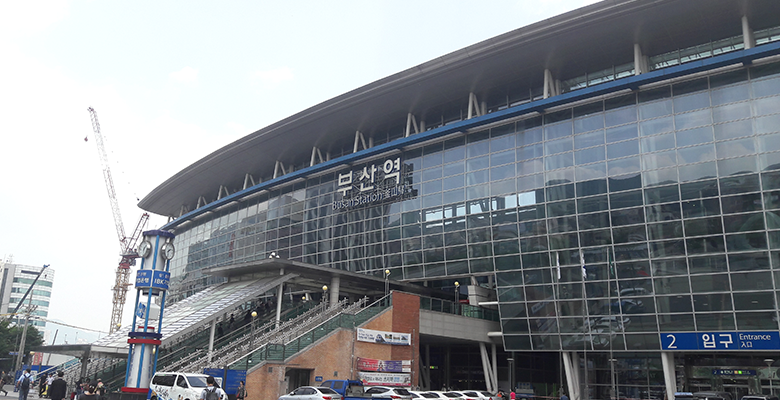 If you are planning a trip to Busan, the second biggest city in South Korea, read this ultimate guide to getting around Busan by public transport!

Like the T-money card in Seoul, there is a prepaid transportation card called Cashbee.

If you already have a T-money card, you are also able to use it in Busan. If you are only going to travel within the city of Busan and have not purchased any transportation card, then getting this Cashbee card will be handy as it is used not only for transportation but also in many stores and even movie theaters.

Taking a metro in Busan is an economical way to explore the city because it runs through almost all of the tourist destinations and the fare is relatively cheap. Plus, the announcements of the destinations are spoken in Korean, English, Japanese, and Chinese.

If you are making a one-day stop in Busan, one-day metro tickets are highly recommended. You can buy one-day metro tickets at Gimhae International Airport, Busan Station or Busan Central Bus Terminal or from the ticket vending machines inside metro stations. With this ticket, you can take all metro lines an unlimited number of times for the day of purchase except for the light rail service.

As you can see, there are 4 major metro lines in Busan: Orange, Green, Brown, and Blue. There is an additional Purple Line (Gimhae Light Railway) which connects Gimhae Airport (closest to Busan) and the West of Busan. The fare is 1,300 won for a destination within less than 10 km (1 section) and 1,500 won for any other destinations (2 sections).

*Take note that travel times on Busan’s metro can be comparatively longer than that of Seoul.

Regular taxis are usually in gray color, and if you see a black taxi with a yellow taxi sign on top, they are deluxe taxis, which offer a free car phone service.

Most taxi drivers do not speak English (although some may speak Japanese) so it will help a lot if you show the name of the destination in Korean to the driver. The taxi drivers in Busan are generally very friendly towards foreigners.

However, there are some unscrupulous taxi drivers who often assume that a foreign traveler wants to go a long distance and they may attempt to charge much higher fixed fares (as much as 20,000 KRW) in some areas such as around Busan Port.

Insist on the meter and take a different taxi if your driver refuses to use it. Asking about the approximate fare will be helpful before taking a taxi.

The bus network in Busan is fairly comprehensive. It is recommended travelers to Busan use the T-money card or Cashbee card as cash fare is higher than the transportation card fare. Also, if you pay in cash, you can’t receive a transfer discount.

Transportation cardholders can also enjoy free transfer within 30 minutes from getting off. However, they must touch the card on the card reading machine when you get off the bus.

Inside the bus, you will be able to find a sign with destinations displayed in Korean, English, and Japanese, although there will be no English route maps whatsoever on the bus. Make sure you check your route and see which bus to take in advance.

Here are some of the key bus routes that run through major tourist destinations in Busan. 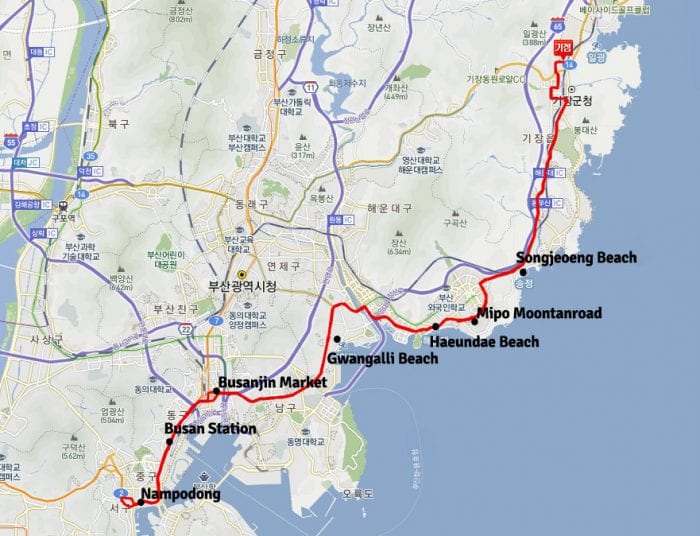 3. Bus No. 307 runs every 14~18 mins from Gimhae airport to Haeundae. Taking this bus can also help you cover most of the places across the city of Busan comprehensively. Taking Busan City Tour Bus can be another great option as it is a budget-friendly transport and you can hop on and hop off wherever and whenever you like. For more info, click here.

*Take note that Busan City Tour Bus does not operate on Mondays.

There are 2 main bus terminals for express and inter-city buses: Busan Central Bus Terminal and Seobu Inter-City Bus Terminal. The bus fare depends on the distance and the type of express or inter-city bus you take.

Busan Central Bus Terminal: Located in Nopo-dong, here you can ride both express buses and inter-city buses. The Dongbu Inter-City Bus connects all regions with Busan, including some of the major destinations like Donghae, Gangneung, Sokcho, Jinju, and Tongyeong.

Seobu Inter-City Bus Terminal: Located in Sasang, you can take inter-city buses to Jeolla-do, Gyeongsang-do and other major cities in Yeongnam Region and Honam Region, the southern part of South Korea.

In big cities like Seoul and Busan, riding a bike can be dangerous, this is especially true if you have ever seen the driving style of the people in Korea. In Haeundae district, there are dedicated bike lanes on many pavements that are relatively safe.

The city of Busan offers a public bike-share program in several spots. You can find a free bike rental scheme in the Haeundae district as well. It runs between 9:30 and 17:50 from March to October. For foreigners, the passport or ID card is required.

Things to do around Haeundae

👉6 Awesome Things To Do In Busan

Find this blog informative? There are plenty more posts about Busan and other parts of Korea on our blog so make sure you check them out before you plan your trip to Korea!

Don’t forget to drop by Trazy.com, Korea’s #1 Travel Shop, if you want to find out the latest, trendiest and newest things to do in South Korea!

TOP 6 Local Hidden Gems in Busan You Must Visit