Each year, over 10 million tourists flock to Chiang Mai, the second city in Thailand. The reason why Chiang Mai is so attractive is its long history and rich culture. You can easily find old temples while walking through the city and be absorbed in old scent. Now, let’s dive into the enchanting city and find out the ways of historic and cultural travel to Chiang Mai!

At the time the ‘Sukhothai Kingdom’ was being built in the 13th century around the Chao Phraya River basin, the Lanna Kingdom was also being built in the northwestern plateau. ‘Lanna’ means ‘a million rice fields’ which matches the fact that a significant portion of Chiang Mai is covered with rice paddies. A sage king Mengrai united several minority tribes to build a kingdom, deciding Chiang Mai as the capital. The Kingdom lasted for about 500 years thereafter, but eventually faded into the mists of history after the reign of the Ayutthaya Dynasty and Burma. However, the Lanna Kingdom has left a unique “Lanna style” throughout Chiang Mai. You can find the most colorful and delicate culture in Thai history, in the existing architecture of Chiang Mai. The style features detailed patterns, colorful sculptures, gilt-bronze decoration, and elevated roof tips. A representative architecture is Wat Phra Singh to be covered below.

Besides, the very famous water festival in Thailand, “Songkran” originates from the Lanna Kingdom. It was a New Year celebration held by the Kingdom. Today, the first day of the new year in April, the festivals take place in Chiang Mai, Bangkok, Ayutthaya, Phuket and elsewhere in Thailand. Among them, the one in Chiang Mai is the most widely known.

If you would like to examine more about Songkran festival, read our blog post: The Ultimate Guide on Songkran in Bangkok

Buddhism cannot be left out when discussing the history and culture of Thailand. It is said that Buddhism was spread to Thailand around the 3rd century B.C. Buddhist culture is strong throughout the country to such an extent that Hinayana Buddhism was state religion until 1997. Especially, there are over 300 temples in Chiang Mai, some of which are as old as the city. The old town of Chiang Mai is surrounded by moats and castles. Chiang Mai people are living both past and present, crossing this boundary. In the old town, irreplaceable cultural properties including several temples are breathing. Let’s take a look at it one by one. Wat Phra Singh is a temple known as the center for young monks to practice. The name which signifies the lion was inspired by the unique lion style statues in the precinct. What are worth watching are an old small library that has a characteristic stone base to protect valuables from flooding and the main vihara. Inside the shrine, the lifestyle of the ancient Lanna people remains as a mural, offering a unique spectacle. Furthermore, the golden roof linings and wooden decorations are impressive enough to marvel at for a while. The temple Wat Chedi Luang has incredible architectural features, which are imposing steps on the entrance of the Buddhist sanctuary. Once, the temple was home to the most important religious object, the Emerald Buddha. Now, it has been relocated to Grand Palace in Bangkok. Even though the temple had been damaged by a natural disaster, visitors can still see the original brick temple thanks to restoration. Do not miss an ancient Dipterocarp tree which is believed to protect Chiang Mai from evil and disaster.

Wat Chiang Man is the oldest temple in Chiang Mai of which establishment begins in 1296 when the first king of the Lanna Kingdom decided Chiang Mai as the capital. The temple holds several old Buddha images and a statue made of crystal. Hence, it is suitable for travelers who desire to spot the antiquities of Buddhism in Thailand.

If you would like to learn Chiang Mai more deeply and conveniently, book tours below :

If you would like to explore the city with special transportation, refer to tours below :

Isn’t it wonderful to take modern transportation and appreciate the beauty of time-honored city? :

Doi Suthep is a mountain where you can see the panoramic view of Chiang Mai city! On top of the mountain lies a sacred Doi Suthep temple. This mountain is part of the Doi Suthep-Pui National Park which consists of twin peaks of a granite mountain. One peak is Doi Suthep and the other one is Doi Pui. A day-trip to the mountain will make an interesting day excursion from Chiang Mai. Consider a tour below to take in the scents of Chiang Mai. 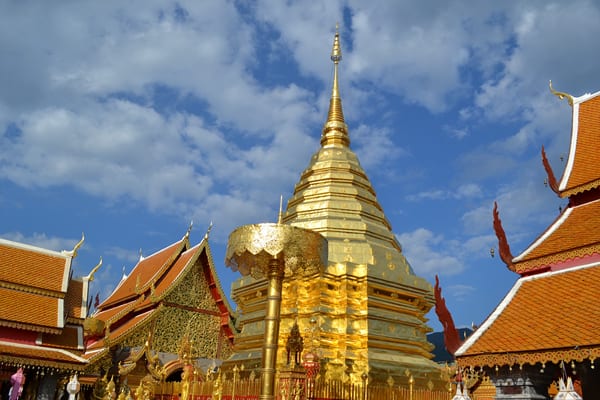 If we have to choose one temple that symbolizes Chiang Mai and the Lanna kingdoms, it is by far the Wat Phra That, also called Doi Suthep. As an acknowledged pilgrimage site, Doi Suthep has attracted travelers and locals, too. In the temple, the ashes of cremated Buddha’s shoulder is enshrined. Besides, it is cherished for not only its dazzling architecture but also the view of Chiang Mai from the temple.

The giant Chedi(A Thai Buddhist monument similar to a stupa) in the central courtyard of Doi Suthep overwhelms the view. Seven tons of gold were melted to paint the chedi, while on the top were majestic diamonds that the Thai King Phumiphon gave alms. At the four corners of the chedi, a huge umbrella-shaped goldsmith ornament is kept in place while the golden brilliant bells and statues of Buddha around add grandeur.

To meet Doi Suthep, located 15 kilometers west of Chiang Mai, at 1080 meters above sea level, you have to drive for about 40 minutes along a winding mountain path and climb 306 stairs. If it’s hard, you can also get there by joining the Doi Suthep Temple tour with convenient transfer service and a tour guide! Wat Rong Khun, also known as the White Temple is dazzling with its white color. Especially in the sunlight, the glass ornaments glitter, creating the highlight scene. The temple was colored white to convey to visitors one of the Buddhist teachings that concentrating on the mind is essential in life. Baan Dam or the Black House is a group of more than 40 houses in black color and various shapes most of which are in traditional style. Its design is like a temple with multiple buildings and structures. This place is a museum and an art studio at the same time that exhibits dead animal skins, bones, and teeth.

Wat Rong Sear Tean is a temple painted in blue, both inside and out. The name of the temple, “Sear Tean”, means “dancing tiger” because there were tigers that used to jump over the river, according to legends. The hall inside is eye-catching with beautiful paintings and a huge white Buddha in the center.

A noteworthy feature of the Golden Triangle Area is that three different countries — Thailand, Laos, and Myanmar — share borders here. Another feature is the zone is the biggest heroin and opium production area in the world because the natural conditions including the climate are suitable for their production. You can look around the opium museum nearby to study about the history of the opium trade and heroin production.

Book a tour to look around these sites in one day:

Historic and cultural travel to Chiang Mai would be a way to better understand the city. For further information about Chiang Mai or Thailand, do not hesitate to visit Trazy.com, Asia’s #1 Travel Shop!