Korean barbecue is one of Korean people’s most favorite dishes! But there’s a special way that Koreans usually eat barbecue. If you come to Korea, you should definitely try it in the Korean way, like a local. “Samgyeopsal” refers to pork belly in Korean. Korean people eat Samgyeopsal because it is generally cheap and yet delicious.

We will let you know how to eat Samgyeopsal step by step, which will make Samgyeopsal even more tasty to eat. 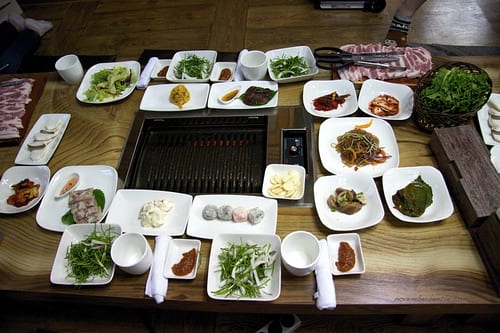 Usually the restaurants offer a variety of side dishes that you can eat with the barbecue. You can wash your hand with a water towel and try the side dishes first.

If you’re eating Samgyeopsal with Korean friends, just let them grill it. They are the masters of Samgyeopsal. 🙂 However, when it’s just you for the first time, there are some tips on how to grill the pork barbecue.

Do not flip the meat many times.

Unlike beef, it is not a good way to flip the pork barbecue many times. When you flip it too many times, it will be too dry. In order to make the most delicious Samgyeopsal, Korean people flip it just one or two times. The best time to flip is when the juice starts to bubble on the surface.

After you flip the pork and once it’s grilled enough, cutting it in a line beautifully will make you like a master of Samgyeopsal like this! You can also grill the Kimchi and garlic if you want to try.

The most important and the most Korean way of eating Samgyeopsal is make a wrap with a vegetable. Korean people call this “Ssam”. So let’s make a ssam!

How to wrap Samgyeopsal.

First, choose a big vegetable which will be the base. Lettuce and sesame leaf are the most frequently eaten. On the lettuce, put the meat and other vegetables. Include a small spoon of rice according to your taste. Here is the second most important part of eating Samgyeopsal.

Foreign visitors don’t know about this part so many miss this delicious desserts(?) and leave the restaurant.

There are many kinds of desserts including cold noodle (Naengmyeon), spicy noodle (bibim naengmyeon), rice with soup (Jjigae), rice mixed rice with many toppings (bibimbap), and fried rice (bokkeumbap). All of these are so delicious so you can order whatever you want to have.

Eating these menu with the pork barbecue is also very delicious so leave some barbecue for the dessert!

2. Naemooban Sikdang in Sinchon, Seoul : A military squad room-themed Korean barbecue restaurant. It is famous for offering a bottle of Soju at 990won.

4. Ungdam Sikdang in Jeju : People grill Samgyeopsal on a lid of a caldron. One thought on “How to eat – ① Samgyeopsal (Korean barbecue)”