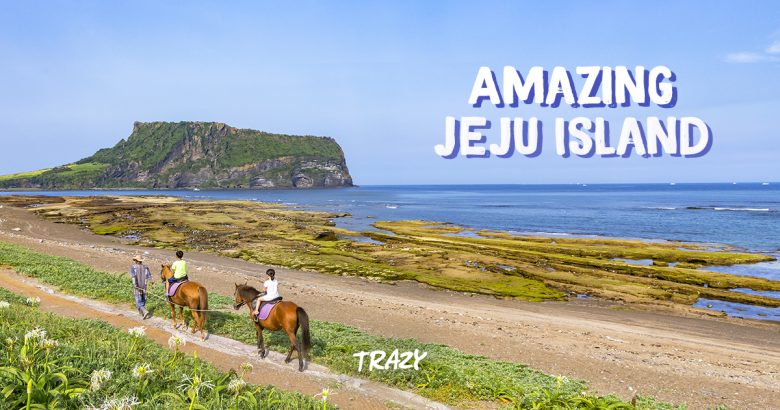 Jeju Island is South Korea’s largest island which has long been the country’s favorite domestic holiday destination thanks to its beautiful beaches, lush countryside, and amazing viewpoints all over the island. Not to mention being a favorite spot for travelers as well. If you’ve never been to Jeju Island before, you’ve come to the right place.

Check out the ultimate 3-day itinerary for Jeju island so that you can go exploring all of Jeju’s hottest spots.

Seopjikoji is located at the end of the eastern shore of Jeju Island and boasts fantastic scenery, especially in April when yellow canola flowers are in full bloom. “Seopji” is the old name for the area, and “Koji” is Jeju dialect meaning a sudden bump on land.

On top of the hill stands Hyeopja Beacon Fire Station, reaching 4 meters in height with a width and length of 9 meters. The selling points of Seopjikoji have got to be the fields without a tree in sight, allowing a magnificent view of the horizon.

Planning a new year’s trip to Jeju and visiting here is a great choice, as thousands will flock to Seongsan Ilchulbong, a.k.a Seongsan Sunrise Peak to watch the critically acclaimed view of the sun rising above the horizon, hence the name. The peak is 182 meters high with a huge crater in the middle. The tip of the peak is surrounded by 99 sharp rocks, making the peak resemble the shape of a crown.

Learn about Jeju Islands’ unique culture and customs in this wonderful folk village! Located on the east coast of Jeju Island, Jeju Folk Village is a small town that holds a vast amount of culture.

The Jeju Folk Village shows the unique culture of Jeju Island: the black lava rock walls, the straight but curvy alleys to block the wind, and the stone grandfather statues (Harubang), which have become prime features of the landscape. The local black-haired pigs and tongsi (pigsty/restroom) are especially well-known characteristics of Jeju folk culture. You can see and experience it all here!

Hamdeok Beach is famous for its clean and shallow water, attracting many family visitors during summer vacations. The beach offers great scenery with its emerald-blue water, an arched bridge over black basalt, and a red lighthouse. If you visit Hamdeok in the evening, you may think it’s not much of a beach, but that’s because the tides have come in and covered most of the beach. If you visit Hamdeok Beach in the morning, however, you are in for a treat.

In the morning the tide goes out and you’re left with an amazingly huge sand bar with plenty of space for people to spread out, tide pools for little ones to play in safely, and rocks to hunt around for crabs and other shellfish. which also serves as a stunning view and photo opportunity!

Manjanggul is one of the finest lava tunnels in the world and is a designated natural monument. it is the 12th-longest lava tube in the world and the second-longest on Jeju island. out of all the stalactites, stalagmites, columns and etc., a lava column of 7.6m is the largest known column in the world.

One of the highlights of Manjanggul is the Stone Turtle, a rock that was covered in lava after it fell, and solidified into the shape that can be seen today.

Hyeopjae Beach is located on the west side of Hanrim-eup and is part of Hanrim Park. The beautiful white color of the sand comes from large amounts of crushed seashells that have been mixed in with the sand.

The long seashore stretches for 9 km and has azure seawater and evergreen forests scattered around the vicinity, making the scenery very beautiful. A perfect spot for a stroll along the beach as well as a dip in the water!

Cheonjeyeon, meaning “The Pond of the Emperor of Heaven” is a three-tier waterfall. Coldwater flows out of the ceiling of a cave to make the waterfall. Between the precipice and the lower layer, water springs out. In the first cascade, the cliff is 22 m high, and the waterfalls into Cheonjeyeon pond which is 21 m deep. From there, the water goes to the second waterfall and falls 30 m,  continuing to the third and final waterfall. Eventually, the water reaches the ocean.

According to Korean legend, seven nymphs would descend from the heavens at night and bathe in the waterfall’s pond. The falls are a popular tourist attraction in Jeju as the three-tier waterfall is a must-see sight to take snapshots of.

Sanbangsan Mountain is the result of violent volcanic activity some 700,000 to 800,000 years ago and is, in fact, a huge body of lava. It is located next to Sanbanggulsa temple and is only a short hike of up to 30 minutes. It’s one of the places in Jeju that offers a picturesque view of the temple along with the mountain as a backdrop.

Also, due to its close location to the sea and its high elevation, the peak is often ringed with clouds, offering another photo opportunity. The upper slopes of the mountain have their own distinct climatic conditions and are protected for their value for botanical research.

Songaksan is a simple volcano on Jeju Island which has double craters and a parasitic volcano. The main volcano itself sits 104 m above sea level. Inside the main crater, volcanic ash still remains, but it’s closed to the public until July 31st, 2020, in order to preserve the environment.

Mt. Songak is one part of Olle road route 10. When walking along the trail, you can’t help but stop and awe at the view it presents you; Blue waters of Jeju are out across the horizon, and behind you, you can see Sanbangsan as well as Hallasan. To witness the beauty of Songaksan and its scenery, check out these packages available for you right here!

Hallasan is a shield volcano on Jeju Island in South Korea. It is the highest mountain in South Korea, standing at 1950 m above sea level, the area around the mountain is a designated national park, the Hallasan National Park.

Hallasan Mountain is relatively easy to hike with hiking courses less than 10 km in length, it is possible to go to the peak and back in one day. However, the constantly changing weather brings a lot of wind, so make sure that you are well-prepared before you start climbing.

Jeongbang Waterfall is the only waterfall in Asia that falls directly into the ocean. At the top of the cliff, there is an old evergreen tree that leans over the cliff as if it will fall at any moment, but amazingly it hasn’t moved from that position for a long time. Truly a sight to see as one of the three must-see waterfalls in Jeju Island!

Cheonjiyeon Waterfall is one of the main tourist attractions in Jeju Island. It is 22 m high and 12 m wide, and the waterfalls into an artificial pond below which is beautiful to look at both during the day and at night. At night it gives off a different vibe with lights that illuminate the area and make the waterfall seem more beautiful.

These places definitely seem worth the visit right? Then it’s time to build your itinerary right now! Unsure how to get around and visit the places we mentioned? No worries, have a look at all these different transportation options for your easy trip to go all over Jeju Island!

You can either go on a bus tour and visit some famous places:

You also have the choice to get on a taxi tour:

If you have a driver’s license that is eligible to drive in Korea, rent a car in Jeju Island:

If you are visiting Jeju Island in spring, check out the packages below:

There are just too many attractions and places to visit in Jeju, so if you’d like to check out some of the other places that were not mentioned here, feel free to take a look at Trazy.com, Korea’s #1 Travel Shop!