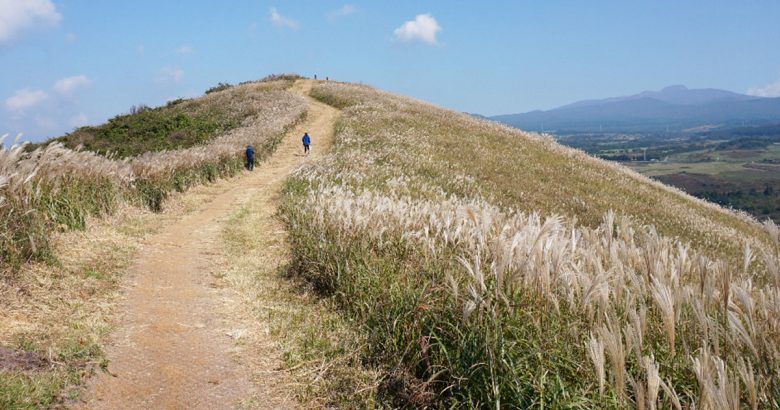 Jeju Island is the largest island in South Korea and it was formed by the eruption of an underwater volcano around 2 million years ago. Therefore, there are more than 360 Oreums distributed throughout the island. An ‘Oreum’ is a Jeju dialect, which means a volcanic cone. If you want to make the most out of the Jeju Island trip, you should definitely visit Oreums. Since it is impossible to visit all the Oreums during your trip, check out the list of the Top 12 Oreums in Jeju Island that are worth a visit!

Geum Oreum is in the west of Jeju Island and is renowned for its beautiful sunset view. It was featured in the popular Korean TV Show, ‘Hyori’s Bed & Breakfast’, where Hyori and IU visited the Oreum together. It’s also a popular paragliding spot since paragliders can see the most spectacular view of the surrounding plains and deep blue ocean.

Saebyeol Oreum is one of the most visited Oreums in Jeju Island, especially in autumn because of its gorgeous silver grass fields. It’s especially beautiful in the early evening and you can see the magical view of Hallasan Mountain and Biyangdo Island!

Yongnuni Oreum is named after its shape which looks like a dragon lying down. It’s a wonderful place to see both sunrise & sunset views as well as a view of Seongsan Ilchulbong Sunrise Peak. Compared to other Oreums, the slope of Yongnuni Oreum is gentle so you can easily go up the hill within 30 minutes.

Andol Oreum is probably the hottest Instagrammable spot in Jeju Island these days. It was recently opened to the public since it is private land. It used to be a hidden gem of Jeju Island but it’s now one of the must-go places in Jeju, being spread via SNS.

Keep in mind that you should search Andol Oreum Secret Garden if you want to visit this famous Instagrammable spot. The address of the Secret Garden is 2173, Seongdang-ri, Gujwa-eup, Jeju-si and you should pay 2,000 won per person in cash. Opening hours are from 9 am to 6:30 pm.

Darangshi Oreum stands about 380 meters above sea level and it’s a great place to overlook the main tourist attractions of Jeju, such as Seongsan Ilchulbong, Udo Island, and Hallasan Mountain. It is also located near Maze Land, Bijarim Forest, and Yongnuni Oreum.

Abu Oreum is the representative circular crater in Jeju Island. You can reach the peak only in 5 minutes but it takes about an hour to walk a full circle of the Oreum so it’s a nice place to take a walk. It was also featured in Lee Hyori’s music video, ‘Seoul’. It’s a popular snap photoshoot spot these days, especially among pre-wedding couples.

Geomun Oreum is 465 meters above sea level, located right next to Hamdeok Elementary School, Jocheon-eup. It was named Geomun because it looks black (geomun) with its thick forest. Once arriving at Geomun Oreum, you will be greeted by a lavish green forest that makes you feel like you are in another world.

Baekyaki Oreum was named after its feature that plenty of medicinal herbs and plants are grown at this Oreum. A number of cows are freely out to the grassland, which brings Daegwallyeong Sheep Farm in Gangwon-do to mind. It is an emerging snap photoshoot spot after being featured in ‘Hyori’s Bed & Breakfast’. Also, it’s a great place to see Udo Island and Seongsan Ilchulbong at a glance.

Tarabi Oreum is referred to as one of the most beautiful Jeju Oreums. Its autumn scenery is particularly famous because of the golden sunset view harmonized with silver grass fields. When you reach the peak, you will be stunned by the vast landscapes of windmills and grassland.

Mulyeongari Oreum is one of the Oreums that have a wetland on the top of Oreum and it is designated as the fifth Ramsar wetland in 2006. It was the background scene of the Korean movie ‘A Warewolf Boy (2012)’, featuring Song Joong Ki and Park Bo Young. There are more than 800 stairs that take about an hour to reach the top, which can be quite challenging.

Sara Oreum is the highest Oreum in Jeju Island, which is also referred to as a hidden gem of Hallasan Mountian. It is located on the south of the Seongpanak Trail in Seogwipo. After around 3 hours of hiking, you will encounter the crater lake at its summit, which is the highest among all of Jeju’s crater lakes. The view of Seogwipo city and the sea you witness from Sara Oreum is truly amazing.

Gunsan Oreum is the largest Oreum in Jeju Island and it’s one of the best sunset destinations. You can either reach the top on foot or by car so even inexperienced hikers can easily walk up the hill. It’s also a recommended spot to see the fabulous landscapes of the Sanbangsan Mountian and Seogwipo sea.

Did you enjoy reading about Jeju Oreums? If you want to find out more trendiest & latest things to do in Jeju Island, don’t forget to check out Trazy.com, Korea’s #1 Travel Shop!