Buddhism is a national religion in Thailand. And without a doubt, Buddhism plays a big role in Thai culture, which is why we can see many temples, where Thais often give their spiritual blessings and pay their respects to Buddha. So, when visiting Thailand, one place you shouldn’t miss out on going is to the temples. Visit some of the must-see temples in Thailand to delve deep into Thai culture and learn about their beliefs in different provinces. To kick off our list of must-see temples in Thailand, we’ll begin with Bangkok. You may not have thought there would be many temples in Bangkok because it is a very busy place as the capital city of Thailand. On the contrary, there are hundreds of temples where most of them are quite old, known to have existed in the Rattanakosin era. (circa 17th century)

2) Wat Arun (Temple of Dawn) – is a Buddhist temple that is located on the riverside of Chao Phraya River in Bangkok. This place is well known for its stunning architectural design and decorations of the temple reaching 70m high.

3) Wat Pho (Temple of the Reclining Buddha) – is a first-class royal temple and monastery, which is situated in the south of the Grand Palace. In this place, you can see the largest reclining Buddha and an extensive collection of the Buddha’s images in Thailand.

If anyone wants to visit all these places and more,

Or a One-Day Bangkok City and Temples Private Taxi Tour! 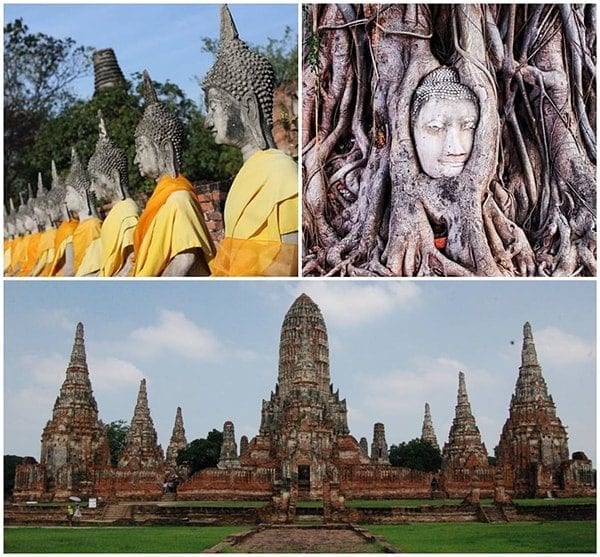 During 1351 to 1767, this province was the greatest kingdom of Siam called ‘Ayutthaya Kingdom’. Hence, there are many must-see temples, ancient palaces, monasteries, and statues of Thailand.

1) Wat Yai Chai Mongkol – meaning ‘The Great Monastery of Auspicious Victory’, was built in the 16th century. This place has a reclining Buddha statue, and the tallest Chedi situated in the middle of the temple, at 72 m tall and visible to all who approach the city from the east. Also, it’s surrounded by hundreds of seated statues of Buddha himself, making it one of the absolute must-see temples in Thailand.

2) Wat Mahathat – has been the epicenter of Ayutthaya since the 14th century. The prangs (tall tower-like spires) in Wat Mahatat are the first to be built during the Ayutthaya kingdom. One of the attractions in this unique temple is the carving of the Head of Buddha embedded in a tree. This head was cut off by invaders during the reign of the Ayutthaya Kingdom.

3) Wat Chaiwatthanaram – Once a beautiful and majestic temple, this place had been deserted for deterioration after the siege on the Ayutthaya Kingdom by the Burmese in 1767, until it was designated as a UNESCO World Heritage Site in 1991. The place had contained various works of art that portrayed Buddha and many Buddha statues painted in gold and black.

Want to tour around?

If you want the ultimate luxury experience in Ayutthaya,

Take a Private Helicopter around Ayutthaya from Bangkok

Take a Pearl Cruise around Ayutthaya with Lunch Buffet from Bangkok Another historic province located in the lower northern region of Thailand, stretching all the way to the Laotian border. This province is also one of the oldest cities in Thailand that was founded over 600 years ago.

1) Wat Phra Si Rattana Mahathat – can be said to be the most famous temples in Phitsanulok. The reason for its reputation is because of ‘Phra Phuttha Chinnarat’, the gold-covered statue of Buddha that sits inside the temple is considered to be one of the most beautiful Buddha figures in Thailand.

The most famous province in northern Thailand, full of multi-cultures of Thai, Laos, and Myanmar, and exhibiting the history of the ancient kingdoms in the north.

1) Wat Phra That Doi Suthep – is a holy temple located on the hillside, Doi Suthep is in the northwest of Chiang Mai. Phaya Naga, a mythical creature that resembles a serpent, decorates the 300 steps up to the temple. Gold Chedi, golden statues of Buddha, an emerald Buddha, a statue of the Hindu god Ganesha, and many charming bells lay at the heart of this temple.

To visit, we offer an option where you can also visit the nearest hill tribe village! Yet another famous province in the north, well known as the northernmost part of Thailand.

The highlight of this place is the bridge of “the cycle of rebirth”, an icon of the temple. In the sunlight, the temple’s glass decorations shimmer, creating a fabulous view for all its visitors.

The White Temple still constantly undergoing new additions to give you the best experience. You can go to witness the beauty of this must-see temple in Thailand.

2) Blackhouse (Baan Dam) – is a collection of more than 40 houses in black color and various shapes. This place is a museum, art studio and traditional house at the same time.

3) The Blue Temple (Wat Rong Sear Tean) – is a blue-colored temple, with both beautiful interiors and exteriors. Here, you will feel mesmerized by the amazingly detailed structures with the use of blue and gold.

You can check out all the temples above in this convenient package made just for you.

Now, do you have an idea of what temples to visit when going on a vacation to Thailand? If you still want to visit other places not mentioned, check out Trazy.com!