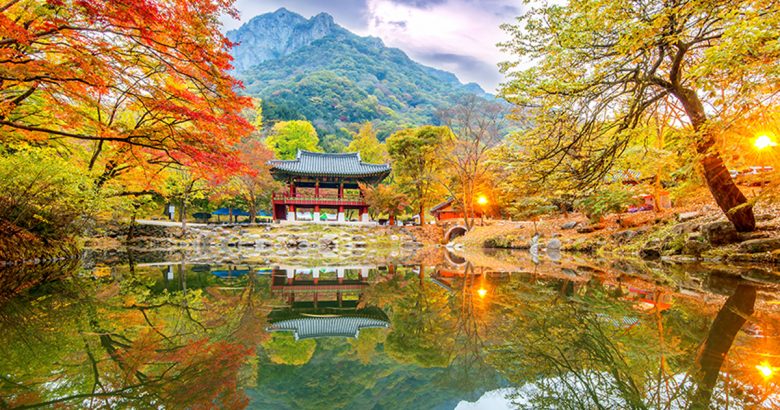 Check out our travel review on Naejangsan National Park, one of the most popular fall foliage destinations in Korea! 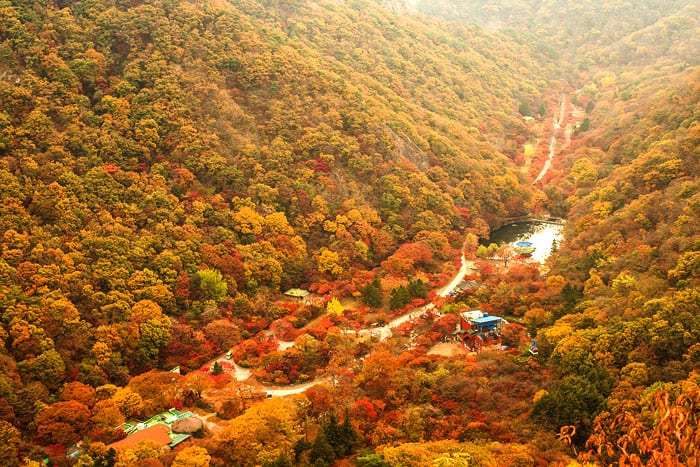 If this is your first time hearing about the park, Naejangsan National Park is home to Naejangsan or Mount Naejang, a beautiful Korean mountain. The park is situated near Jeong-up, a city in North Jeolla Province (Jeollabuk-do) in the southwest of Korea. It is particularly famous for its vivid crimson foliage, 600-year-old nutmeg trees, and waterfalls. At Naejangsan, there are two famous Buddhist temples, Baekyangsa Temple and Naejangsa Temple. The tree-lined path from the Hiking Information Center to Naejangsa Temple is very popular for its breathtaking canopy of colorful autumn leaves!

Though autumn is definitely the park’s peak season, it’s also gorgeous during the spring when azaleas and cherry blossoms bloom, summer when the mountain turns greener, and in winter when the rock cliffs are blanketed in snow.

How to go to Naejangsan National Park

| By train: Take the KTX from Yongsan Station to Jeong-eup Station, then take a local bus to Naejangsan National Park. This can be quite confusing for first-time travelers and the KTX train tickets can be expensive as it costs around 40,000 KRW (around 39 USD). Plus, since fall is a high season in Korea, train tickets may run out real fast.

| By car: It takes around 3~4 hours from Seoul, but during weekends or peak season, it may take even more. During the peak season, access to the mountain can become quite difficult, especially if you arrive late. It’s best to arrive early in the morning and leisurely explore.

| By tour: If you join Trazy’s fall foliage tour, you won’t have to worry about transportation and finding your way to the park. The tour also includes an admission fee, an English speaking tour staff, light breakfast, and a bottle of water.

From Seoul to Naejangsan National Park

The tour bus departs from Hongik University Station at 6:00 am. Other pick-up locations are Myeongdong Station (6:30 am) and Dongdaemun History & Culture Park Station (6:40 am). On the way, you will stop at a rest stop where you can use the bathroom and buy snacks. The bus will arrive at Naejangsan National Park around 10:30 am. From then, you will have free time to explore the park on your own!

Click here for the detailed itinerary of the tour

I took one of the easier courses that involved barely any steep inclines or difficulty. From the parking lot, you will take a 5-minute ride to the ticket booth via a free shuttle bus. The English-speaking tour staff will give you the entrance ticket and you will take another shuttle bus to the entrance of the National Park. All courses start and finish at this entrance where the ticket booths are. The bus fee is part of the tour and you won’t need to wait in the ticket line. The first shuttle was big, but this one was smaller and more cramped but it didn’t matter since the ride was short. There were lots of hikers and tourists even though it was only 11 am. On the way, you can find this sign in the picture below. On the left is the cable car, which you can ride at an additional cost. 0.5 km. To the right is Naejangsa Temple, which is where I went. The walk to the temple takes around 5 minutes and is so enthralling and beautiful that you’ll be stopping for photos constantly! After a leisurely 5 minute walk from the entrance of the park, you will arrive at Naejangsa Temple. The trees and floor were coated with leaves and there was a pond with statues spurting out water. Korean Buddhist temples also have wells called ‘Yaksuteo.’ These wells pour out the water that is fresh and drinkable, which you can do with the plastic cups provided. The highlight was a singing performance by a monk. He was singing a pop song with a voice that you would expect to hear from someone like Pavarotti or Bocelli. He was amazing.

1) Illjumun Gate: It is symbolic because it is the entrance to the Buddhist temple and is apparently good for taking group photos. 2) The lanterns: These were located in front of the temple. I LOVE the colors and found that they made the perfect background for a photo as they swayed gently in the wind. 3) Baekyangsa Temple: Baekyangsa Temple was founded during the Baekje Dynasty (632 C.E.) and it is a good place to take a walk while appreciating the autumn foliage of Naejangsan National Park.

4) Resting area: This area was where a lot of people were sitting down to take a rest. There were stairs leading up to the top where many photos were being taken too. The photographer would stand there and point their camera down so that the foliage would be captured with the subject in the middle. The leisurely downhill walk from the temple back to the parking lot was about an hour and 40 minutes down a long path called ‘Five Colors Danpoong (Korean for autumn leaves) Path’. As we walked down, we saw Uhwajeong Pavilion. The name is derived from the legend that the pavilion once grew wings and ascended into the heavens. Various flowers, trees and foliage surrounding the pavilion created a view that looked almost fake. The water was also so clear that I could see fish swimming!

1) Stone path: I noticed many people taking photos on the stone path leading to the pavilion. They would stand in a line and pop their heads out in alternative directions while flailing their arms, which made for a cute photo.

2) From a distance: I also found that taking a photo from further away made the pavilion look like something out of a postcard. This was thanks to the foliage and trees appearing in the surroundings as well as the ray of sunlight!

Located further down from where Uhwajeong Pavilion is Sinsun Waterfall, which is a historical river bank where Japanese and Korean soldiers fought. Since the river is old, natural stones were stacked in efforts to reconstruct it. Unfortunately, I couldn’t get to see the water flowing out on the day of the tour, but when it does, it just looks amazing!

Because Uhwajeong Pavilion is visible behind the waterfall, it makes for the perfect photo as you can see it in its miniature form in the background behind the cascading waterfall!

| Wear comfortable shoes! I wore a pair of combat boots that were relatively comfortable, but the sneakers would be better. Wear hiking shoes if you plan on trekking along with the more challenging courses.

| Skip the cable car or be prepared to waste a good two or three hours waiting. It’s much better to explore the paths by walking at that time.

| Stick to Bibimbap if you’re not into foods that have strong seasonings or taste. The tour staff told us one of the tourists ordered a bean paste soup, but it turned out to have such a strong taste that was like ‘cheonggukjang’, a fermented soybean paste that has a pungent scent.

| Avoid weekends. If you head to the park on a Friday, there may be an increased amount of traffic when you head back in the evening. This is normal, though. Overall, the day trip to Naejangsan National Park through Trazy’s tour was wonderful. The trail was nice and easy and the weather was amazing. I captured so many amazing photos and got some exercise too! I do kind of wish that I had visited earlier, as the foliage in Naejangsan usually reaches its peak between late October and mid-November. Plus it had rained heavily the day before, making lots of leaves fall to the ground. So, if you are thinking of visiting Naejangsan National Park for fall foliage viewing, it will be best for you to visit between late October and mid-November.

Further, if you hope to visit Jeonju which is a city where you can meet the essence of traditional Korea, check out a tour to visit Jeonju along with Naejangsan mountain:

Are you in Busan right now or planning to stay in Busan during the autumn season in Korea? Then simply join a tour that departs from Busan and enjoy the marvelous autumn foliage at Naejangsan National Park!

Found this post helpful? Don’t forget to visit Trazy.com, Korea’s #1 Travel Shop for more fun and exciting things to do in South Korea.