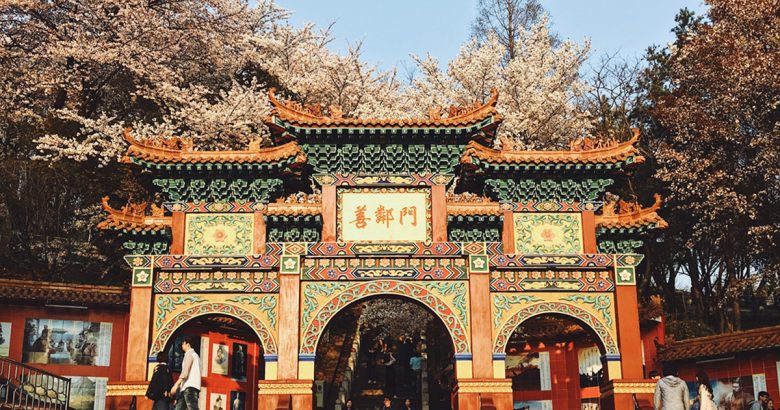 You may have heard about the Korean metropolitan city “Incheon” where a gateway to Korea, the world-class Incheon International Airport is located. Incheon is the third-largest city in Korea, after Seoul and Busan. It was a gateway where the modern, foreign civilizations were brought into the Korean Peninsula and Korean culture was going abroad. Other than the role of the gateway, there are lots of destinations in Incheon you have to visit to fully enjoy the city. Let us guide you to a less known, but an enchanting city, Incheon! 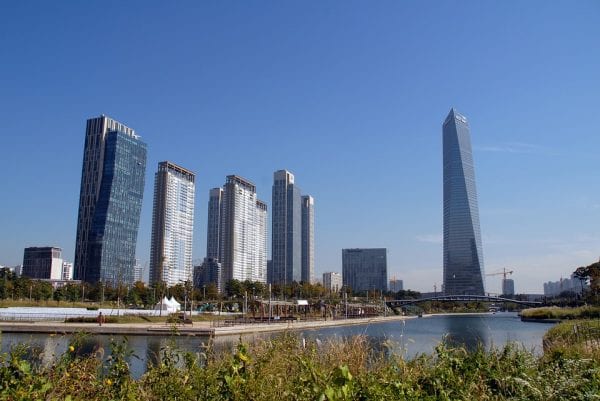 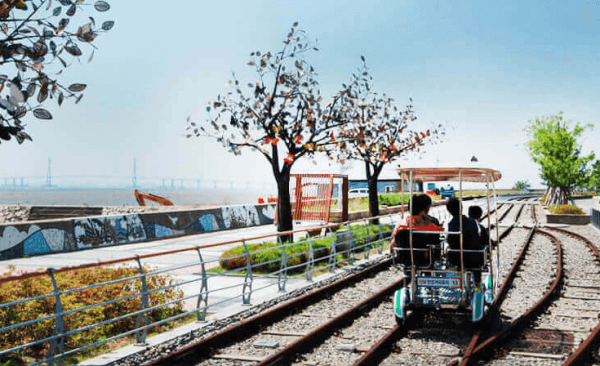 Have you ever dreamed of riding a bike just along the sea or river in a romantic and cool mood? Make a dream come true by visiting railbike venues in Yeongjongdo. Railbike is a form of a bicycle designed to be ridden along a railway track and Yeongjongdo is an island in the vicinity of Incheon International Airport. Greet the fresh air of the West Sea of Korea taking a fun, unique ride! 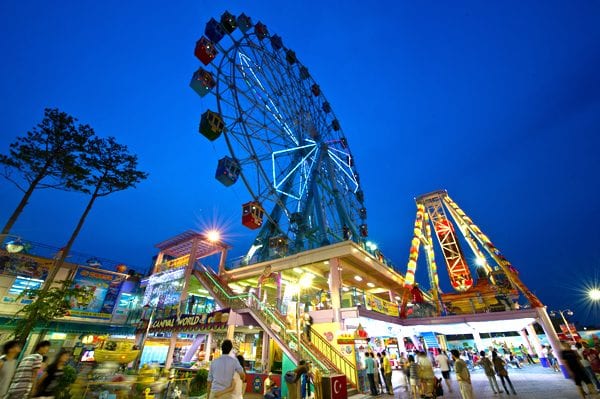 If you would like to view the sea in the vicinity of Seoul, Wolmido Island is a suitable place to visit due to its proximity to Seoul. Also, it is famous for lots of attractions to enjoy including the pirate ship ride(Viking ride) and the “Disco pang-pang” at Wolmi Theme Park & My Land. Isn’t it nice to enjoy sea-views and have fun from entertaining attractions altogether in Incheon? The disco pang-pang will make you excited by bouncing you on the rides with rhythmical songs.

It is the Incheon’s cultural village with colorful paintings of fairy tale murals and figures, such as Dorothy, and princesses. Take cute and charming photos at the village with adorable characters on the wall! It is a perfect place to come with kids or friends.

As soon as you arrived in Incheon Chinatown, a giant memorial archway will greet you. Incheon Chinatown, the only official Chinatown in Korea, was built in 1884 as the Incheon Port was opened to foreign countries. As Chinese people settled down, it was once a large Chinese community with more than 10,000 inhabitants in the 1940’s.

However, the breakout of the Korean War in 1950 and the Korean government’s regulations made the town be downsized.

Nevertheless, in this historic cultural village, you will meet the remains of the past and enjoy various types of mouthwatering Chinese foods. For instance, the restaurant which served the famous Korean and Chinese fusion cuisine, ‘Jajangmyeon’(noodles with black soybean sauce) for the first time is located here, along with red bean paste cookies, fire pot dumplings, and crunchy balloon bread.

Besides, unfolded are the stories of two widely loved historical novels in Northeast Asia, ‘Samgukji(Records of the Three Kingdoms)’ and ‘Chohanji(Legend of Chu and Han)’ on the vibrant mural streets. Do not miss out on all these interesting Chinese cultures mingled with Korean cultures! 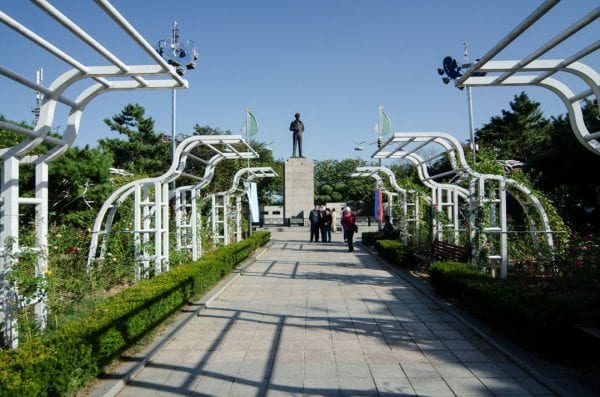 It is the first westernized park in Korea and represents the city. You can understand a chapter of Korean history here since the park houses several historical monuments. With the opening port of Incheon in 1883, areas near the park were occupied with concessions of various countries including the U.S., Qing Dynasty, Great Britain, and Russia. Then, a universal park was built by them in 1888. Later in 1957, as the statue of General MacArthur who commanded the Incheon landing operation during the Korean War was erected, the park was renamed ‘Jayu Park’, meaning ‘freedom’ in Korean.

By the way, the park was a shooting location of K-drama ‘Goblin’. 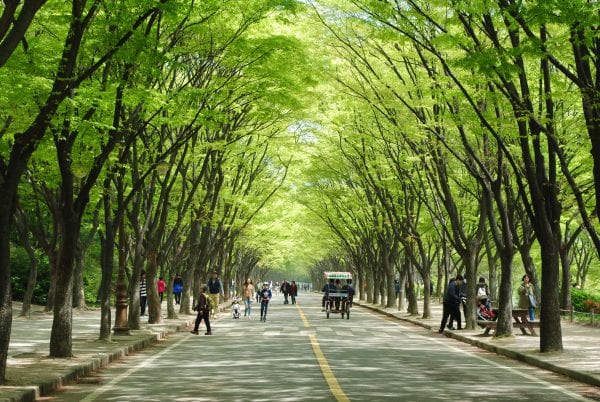 Would you like to stroll around while taking in the atmosphere of the city? Then this park would be a great option! It is the major nature park in Incheon, serving a refreshing forest and air for citizens to take a rest. The area has been designated as a development-restricted zone, allowing visitors to enjoy the rural landscape in the city center. 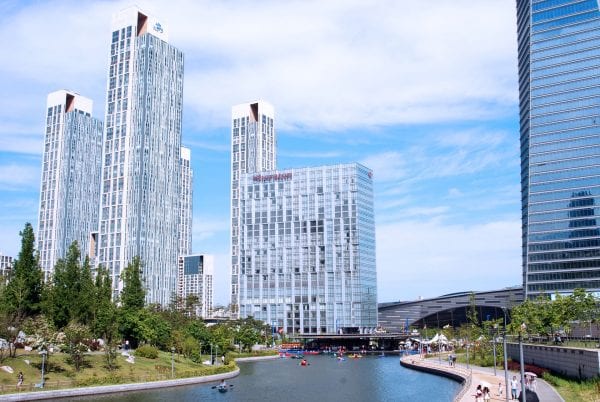 Songdo is a comparatively new international business district located within the Incheon Metropolitan City. Construction of the city began in 2005 and will have been completed around 2025. Commercial areas, residential areas, and green spaces are combined in the district at an appropriate rate, and the city is clean, safe, and progressively modern. It’s also a popular filming location for many K-dramas, such as ‘Itaewon Class’, ‘Crash Landing on You’, and ‘Goblin’.

Songdo Central Park is the first Seawater Park in Korea and consists of 5 parts that do not let you spend boring times. Also, there are bountiful activities to enjoy such as bicycles, water taxis, canoes, kayaks, and boat ridings on the placidly flowing river. You can have not only a tranquil but also a thrilling time in the park.

Things to do in Songdo IBD

Would you like to recall memories of your childhood and be engrossed in nostalgic thoughts when disco music was popular? Or are you searching for attractions to play with your lover or kids? Then roller skating can be one of your choices to spend a joyful moment in Songdo!

If you are a fan of water activities, Songdo Central Park is a must-go spot! Its night view is as beautiful as the Han river and it makes you feel like being surrounded by toy-like buildings since it’s narrower than the Han River. Bonus, party boats protect you from the intense sunlight. Enjoy a picnic on a battery-charged boat, and romance in an exotic Central Park! 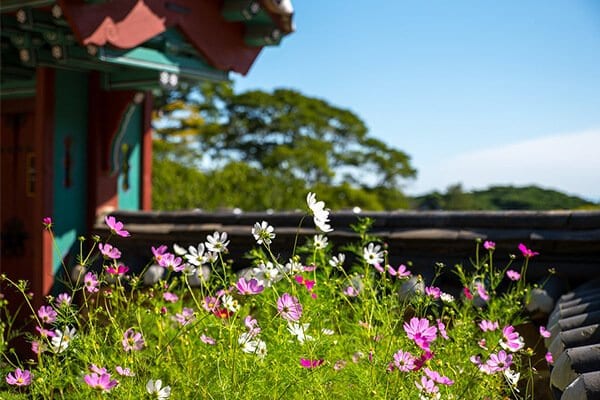 Ganghwa Island is an island located northwest of Incheon downtown. It is well known for housing numerous cultural assets varying from prehistoric ages to modern & contemporary ages. Because the island is located at the mouth of the Han River and was close to the capital of several Korean dynasties, big historical events took place on the island. For instance, when the Mongols invaded the mainland of Korea in the mid-13th century, the island temporarily became the capital of Korea. It would be special to travel to an island with a long history.

The Top Destinations in Ganghwa Island

It is the biggest temple on the island and has a long history of around 1,700 years. The arrangement of temple buildings follows the Korean typical layout of mountain areas and temples. Priceless relics are still preserved in the temple, such as the altar portrait of Buddha in the main sanctuary of the temple, 104 woodblocks of the Sutra of the Lotus, the Buddhist temple bell, and the lamp made of jade.

It was built during the Joseon Dynasty to prevent enemies from invasion. In the late 19th century, when the U.S. troops and Japan troops sent to open the gate of Korea invaded, it was occupied by force at first. However, the Korean people back then recovered the fortress. Until now, traces of artillery shells remain and they convey the images of fierce battles against foreign invasions at the time.

At the breast of Manisan Mountain in Ganghwa Island, a large stone altar is waiting for you. The altar is said to have been formed by Dangun, the mystic ancestor to offer sacrifices to heaven. Circular natural stones which are the lower part stand for heaven, while square stones which are the upper part symbolize the earth. Every year on the third of October, a memorial ceremony is held and celebrated here.

Ganghwa Island is famous for housing approximately 150 dolmens, a trio of giant stones that were erected dating back to the Bronze Age. They are scattered throughout the island, 70 of which have been designated as UNESCO World Heritage Sites. Also, you can marvel at the huge table-style dolmen which is rare in Korea. You will admire the tremendous scale of dolmens along with their long history.

Read more blogs on Incheon for your perfect trip!

If you’re making a stopover at Incheon, explore the city of Incheon with one of our themed tours or customize your very own tour!

Was the blog about the top destinations in Incheon helpful? Find out the latest and trendiest things to do in Korea at Trazy.com, Korea’s #1 Travel Shop!

The Perfect Guide to the 4 Trendiest Spots in Incheon

The Perfect Itinerary for a Day of Discovering Incheon!

9 Incheon Attractions & Tours For Your Next Layover In Korea

Trazy’s Survival Tips for Travelers to Korea: Getting around Incheon