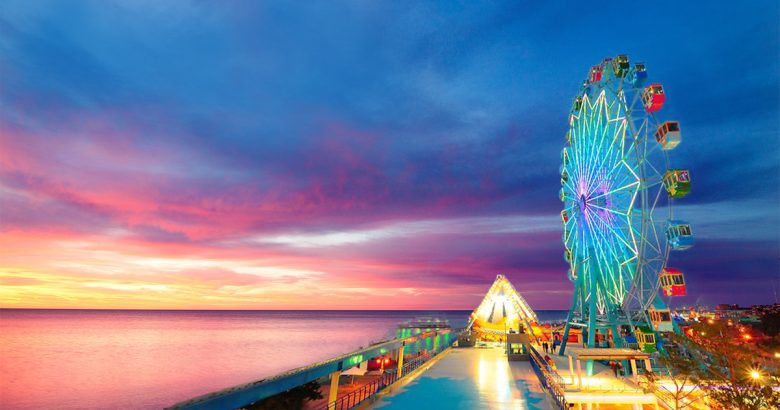 You can’t say that you’ve visited Korea without exploring the streets of Seoul. Seoul is certainly the center of all entertainment and fun, offering the most out of a trip to Korea. Nonetheless, what about taking the road less traveled this time – to Incheon? The third-largest city in Korea offers the best of both worlds as a closer alternative to Seoul from Incheon International Airport whilst offering numerous sights to visit and enjoy. What’s more, with more and more developments underway, Incheon is rising to become the destination à la mode in Korea. So, join us as we take you on a trip to the top 4 spots to visit in Incheon!

Just a few minutes from Chinatown lies Gaehangjang (Open Port Area), an area that offers a slightly different feel from its neighbor. Once a major bridge connecting Korea to the outer world, it was the first passageway for the influx of foreign products and culture. This influenced people’s way of life in terms of clothing, customs as well as architecture. That’s why you’ll notice Gaehangjang is not your typical Korean village. This unique place offers a window into the past, occupied by buildings from over a century ago that reflect various architectural styles, mainly Japanese. For example, there are still remnants of the past such as the Jung-gu Office, the former Japanese Consulate, as well as several branches of Japan’s bank.

A few of the other buildings have been converted for other uses – bringing us to the noteworthy cafes on Gaehangjang Street. Whilst maintaining their Japanese-styled exterior, a handful of them have been transformed into modern cafes allowing people to enjoy a sip of tea surrounded by the past and the present. Each cafe is unique in its own way where you can find little tidbits and trinkets to remind you of your trip to Gaehangjang.

If you truly wish to experience the past, keep up with the fashion trend by dressing up in an outfit from the Gyehwagi (Enlightenment Period). It’s far from the traditional Korean hanbok that comes to the minds of many. Opt for one of these vintage-style looks with an elegant European dress or three-piece suit that will take you back in time!

When it comes to the top spots to visit in Incheon, you can’t leave this particular place out. Wolmido Island is a land of wonders featuring a park, museum, an observatory, and several theme parks on its land, Wolmi Theme Park being the most well-known among them. In other words, this magical seaside theme park is one of the must-go spots when you’re in Incheon. Also, if you’re up for a little bit of fun and excitement, make sure to go on all the crazy rides here. The two most-recommended rides are Tagada Disco, also known as Disco Pang Pang, and the two-story Viking which you won’t find elsewhere easily! 🎢

Enjoy the stunning sea views from the Wolmi Sea Train!

Also take in the beautiful west ocean view by riding the ferry cruise!

Songdo International City is probably one of the top spots to visit in Incheon right now. From the iconic Tri-bowl cultural complex to the massive all-in-one shopping centers, the so-called ‘Gangnam of Incheon’ is equipped with everything you could possibly need. Surrounded by neo-futuristic buildings and a laid-back ambiance, you might even forget that you’re in Korea. The tranquil atmosphere of Central Park, located in the heart of Songdo, surely plays a part in giving this district a foreign yet welcoming vibe. Above all, taking a stroll along the banks of the lake running through the center of Central Park is certainly the highlight of your trip.

What’s more, you can enjoy various water activities on the lake such as canoeing and kayaking as well as taking a boat when the weather is good!

The list of things to do doesn’t even end here yet. Amongst the high-rise buildings and modern facade, you’ll spot a village that seems to be out-of-place. Located along the banks of Central Park sits Songdo Hanok Village, proudly displaying the unique architectural styles of Korea. Housing several traditional Korean restaurants as well as cafes, one particular Hanok will catch your eye – the Gyeongwonjae Ambassador Incheon. Probably the most exquisite Hanok hotel in Korea, get the chance to experience the true way of living like a Korean by spending a day or two here!

Of course, the day’s not over without a bit of shopping. Well then, have you heard of Song Hyun-Ah before? Sounds like someone’s name, right? This is actually what locals refer to Songdo Hyundai Premium Outlets as. With dozens of high-end brands at below-retail prices, this is the perfect place to go on a shopping free. Even a bit of eye-shopping alone will keep you entertained! What’s more, there’s even a rooftop garden for a break away from the bustling of crowded stores. Songdo should be on everyone’s list of top spots to visit in Incheon. 🙂

Located to the northwest of downtown Incheon lies Ganghwa Island. Due to its strategic location at the mouth of the Han River, it has played a fair share of important roles throughout the course of history. That’s why you’ll discover many cultural and historical sites scattered across the island. Nonetheless, there are two must-visit spots that you have to make a stop at before you leave!

The first being Chojijin Fortress. Built as a defense against attacks from the sea, Chojijin Fortress was the stage for many hard-fought battles between Korea and foreign forces, most notably the invasions by the U.S. and Japan that ultimately changed the course of history. Moreover, since its reconstruction in 1973, the fortress continues to serve as a reminder of our past.

Next is Jeondeungsa Temple, another historic site that has weathered the passing of time for over 1,500 years. With a far-reaching history as this, imagine all the things that this temple would have seen throughout its lifetime. In addition to its deep-rooted history, Jeondeungsa Temple definitely offers a sight for sore eyes. Be prepared to be taken aback by the vibrant colors and intricate designs that adorn the structures of the temple. Located within Samrangseong Fortress, don’t forget to put aside some time to look around the rest of the area. There’s so much more to see and do on Ganghwa Island!

Who knew there was so much to see and do in Incheon? Well, instead of the typical tour around the streets of Seoul, how about taking the road less traveled to Incheon? Make sure to drop by the top 4 spots to visit Incheon and fall in love with its charms!

📌 Visit the K-Drama/Movie Shooting Spots in Incheon from Seoul

Book the trendiest activities in Incheon:

8 Best Destinations You Must Visit in Incheon

The Perfect Itinerary for a Day of Discovering Incheon!

9 Incheon Attractions & Tours For Your Next Layover In Korea

Trazy’s Survival Tips for Travelers to Korea: Getting around Incheon