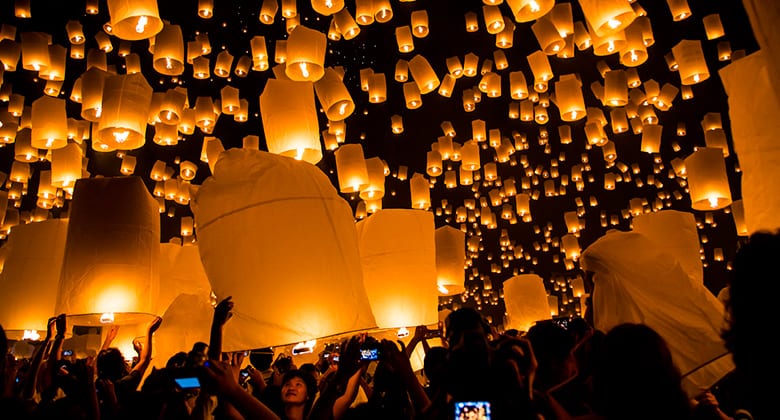 Thailand is famous for its unique and vibrant festivals, with most of them rooted in past Thai traditions and beliefs. The Yi Peng Lantern Festival is absolutely no exception, as it started with the ancient Lanna Kingdom (1292~1775).

Every year, a spectacular scene in the sky unfolds in Chiang Mai for the Yi Peng Festival. Like the iconic lantern scene out of the movie Tangled, we assure you that this festival will leave you breathless! If you want to know what to expect at Chiang Mai’s most beautiful festival, be sure to read on!

1. What is the Yi Peng Festival?

| When: On the day of the full moon of the second month in the Lanna lunar calendar. So, the exact date changes every year. This year, it falls on October 31st (Sat), 2020*.

Yi Peng is a sky lantern festival that is mainly celebrated in northern Thailand, and it coincides with the nationally celebrated Loi Krathong Festival. During the festival, thousands of rice paper lanterns called Khom Loi are released into the air, decorating the sky with a warm, golden glow!

2. How is Yi Peng different from Loi Krathong? In the Yi Peng Festival, lanterns, locally known as Khom Fai or Khom Loi, are lit and released up into the sky with the hopes of sending off all misfortunes with the lantern. It is believed that if the lantern disappears from sight before the candle goes out, you’ll be rid of misfortune and any bad luck the following year! It is usually celebrated over 2~3 days.

First of all, Loi Krathong also only lasts for one night on the full moon of the 12th month of the traditional Thai calendar. Nonetheless, during these celebrations, a krathong, which is a “boat” or “basket” made from banana tree trunks and wrapped in banana leaves, is sent afloat on a river or body of water. This is done with similar intentions:; to wish away all bad luck, grudges against others and worries so that one can start afresh. Hence, the name of the celebration being Loi Krathong. In Thai, the word “Loi” means “to float”  and “krathong” means“basket”.

In ancient times, this festival was a way of paying respect to the Goddess of Water. So, they would decorate the krathongs as much as possible. It will always have a candle to venerate Buddha as well. People would often put strands of hair, nail and toenail clippings, or strips of cloth from old clothes in the belief that their grudges and bad luck would be washed away.

As you can see, the only difference between these two celebrations is the method of wishing away any bad luck in hopes to start life clean from sin.

3. Can I attend the Yi Peng festival as a tourist? 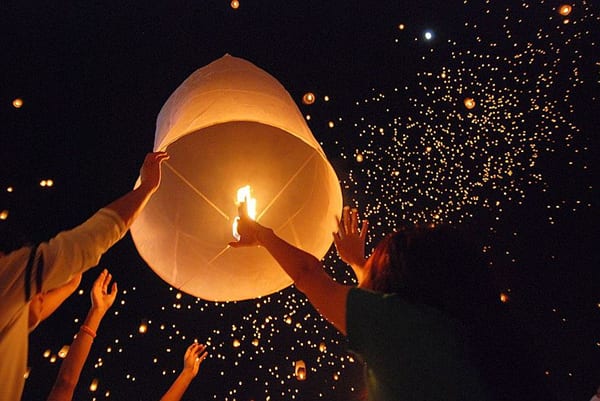 One of the main reasons people want to go to the Yi Peng Festival is to launch their own lantern and snap a photo of the mass release of lanterns into the sky!

However, what many people don’t really know is that the main Yi Peng event is exclusively put on for locals, only around Mae Jo University. If you want to go there as a non-local, the tickets will cost around THB 5,600~12,500, which is about USD 170~380! Even if you are willing to pay that much money, it will be almost impossible to get tickets for the Mae Jo event.

But don’t worry, as there are some private Yi Peng events that tourists can attend as well, and they are considerably cheaper (USD 90~130) than the Mae Jo event.

They are basically the same as the Mae Jo but on a smaller scale, about half the size of the Mae Jo event. They are still spectacular in their own way and a good option for people who don’t want to pay a minimum of USD 170 for a ticket.

At these private Yi Peng events, you can release your own lantern into the sky. The experience simply wouldn’t be the same if you couldn’t launch your own lantern. What’s more, you will also get to take tons of magical photos! 📷

✱ Tip: The Yi Peng Festival is the most popular event in Chiang Mai, thus it’s best to plan as early as possible. Undoubtedly, tickets will sell out quickly. If you’re sure that you will attend the event, purchase your tickets here today!

👉 Get tickets for the Yi Peng Lantern Festival 2020

4. What else happens during the Yi Peng Festival? Of course, the launching of the lanterns might be the most important part of the festival, but there are plenty of other activities going on to complete the festivities, including traditional Thai worship rituals, lantern decoration contests, and the Miss Yi Peng pageant. There are also bazaars, parades, and fireworks! 🎆 If you buy tickets for the Yi Peng Festival, you don’t have to pay extra for dinner as it is included in your ticket price! Also, you will be pleasantly surprised to find many vendors offering different types of Thai food at the event.

The event venues for Yi Peng are normally not close to the city center as flying lanterns can pose a threat to people and especially airplanes. Thus, make sure if your ticket includes round-trip transfer service to the event venue unless you’re okay with making your way to the venue on your own.

👉 Get tickets for the Yi Peng Lantern Festival 2020!

With Trazy, you can get VIP tickets, right up close to the center stage. With this kind of proximity, you’ll be able to enjoy the festival to the absolute fullest, with the best views! Imagine viewing the gorgeous lanterns from the best seats at the festival – it’s truly a magical experience! These hard-to-get Yi Peng Lantern Festival 2020 tickets are available now on Trazy!

Also, Trazy offers free shuttle transfer from different pick-up and drop-off points throughout Chiang Mai! If you were worried about how to get back to the city center at night after the festival, worry no more! We’ve got everything covered, you just sit back, relax and enjoy the festival.

So, all the more reason to book tickets to the Yi Peng Lantern Festival 2020 with Trazy! You’ll be able to experience all this wonderful festival can offer, without the hassle and stress. Let us take care of that!

👉 Book your tickets for the Yi Peng Lantern Festival 2020!

We hope this post was helpful for you to make an unforgettable trip to Chiang Mai. 😊

Last but not least, don’t forget to visit Trazy.com for more travel tips and ideas on your next trip to Thailand!

3 Romantic Things to Do on Valentine’s Day in Bangkok