Skip to content
Chiang Mai Getting Around Thailand WIFI & Transportation Chiang Mai makes the perfect hub for those who are traveling northern Thailand, as it has access to the train station, bus terminals, and the airport. Many travelers consider Chiang Mai as their base camp to visit other northern-Thai destinations. In this blog, we will give you the basic guide for transfer from Chiang Mai to the most popular destinations, which are Chiang Rai, Pai, Mae Hong Son, and Sukhothai. Unfortunately, none of these destinations have train stations, which leaves you with fewer options such as taxi, bus, and sometimes flight.

If you need to figure out how to get to the other destinations in northern Thailand from Chiang Mai, be sure to read on!

1. From Chiang Mai to Chiang Rai 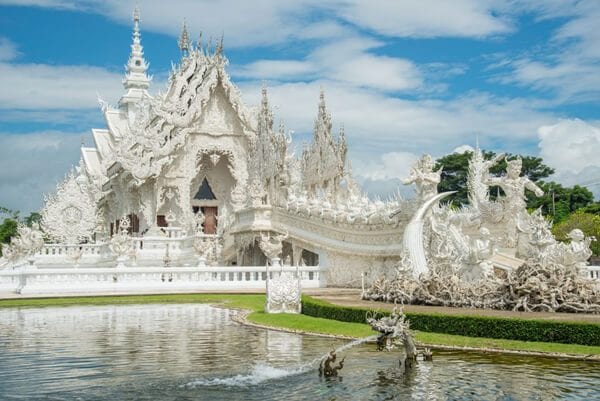 Getting from Chiang Mai to Chiang Rai takes about 3 hours covering 183 km of the mountainous road. If a few winding hours on a bus isn’t your cup of tea, your only other options are to rent a private taxi since flight and train are not available.

Although, if you travel from Bangkok instead of from Chiang Mai, you can take a direct flight to Chiang Rai. But between Chiang Mai and Chiang Rai, private taxi or bus would be your only option.

As mentioned above, the roads between the cities are winding, thus it can be very challenging if you have bad carsick. Renting a taxi is definitely more expensive than the bus, but it’s the best option if you have multiple luggage and traveling with kids or elders. Also, you don’t have to worry about the schedule as you can request the service 24/7 & door-to-door.

If you are looking for a reliable private taxi service to Chiang Rai from Chiang Mai, check out:

2. From Chiang Mai to Pai The distance between Chiang Mai and Pai is about 136 km, but there are a lot of curves in the roads, which make the trip take at least 3 hours by car.

In the past, Kan Airline and Wisdom Airlines operated light aircraft between Chiang Mai and Pai, but after both airlines ceased operations, the Pai Airport is out of service for non-private flights from May 2019. There is no confirmed news when they will be operating again, which means your only options are private taxi and bus.

The problem with the bus for this route is the schedule which ends too early (2:30 PM). If you need to leave later in the afternoon, you should consider renting a taxi. Even though it is more expensive than the bus, it is worthwhile for those who carry loads of baggage, travel with kids, or can’t be bothered to follow the bus schedule.

Make sure to pick a reliable service when you book a private taxi in Chiang Mai. For the best private taxi service from Chiang Mai to Pai, check out: The distance between Chiang Mai and Mae Hong Son is about 368 km. Driving requires between 5 and 6 hours to get there. To go to Mae Hong Son, you can go either through Pai or Mae Sariang. But most people go through Mae Sariang even though it’s further away because the traffic is way less than the other way.

To take a bus to Mae Hong Son, you need to go to Chiang Mai Arcade Bus Terminal. There are 2 buses a day (10:30 AM & 9 PM). Since this is quite a long and bumpy journey, you might want to consider taking a flight or taxi.

There is a daily flight from Chiang Mai to Mae Hong Son at 3:45 PM. It is the fastest way to connect these cities. Since the flight for this route tends to sell out weeks ahead, be sure to book early.

If you could not get a flight and do not want to take a bus either, you can rent a private taxi service from Chiang Mai to Mae Hong Son. The best part is they will pick you up from your hotel in Chiang Mai and drop you off at your exact destination in Mae Hong Son. So, you don’t need to worry about the traveling part at all.

If you need to book a private taxi service to Mae Hong Son from Chiang Mai, check out:

4. From Chiang Mai to Sukhothai Sukhothai located about 290 km south to Chiang Mai, and it will take at least 4 hours by car.

If 4~5 hours in the bus is not very appealing (which it isn’t) you can rent a private taxi. It is definitely worth the money as it will save you from many hassles by transferring you door-to-door from Chiang Mai to Sukhothai.

If you want to book a private taxi service to Sukhothai from Chiang Mai, check out:

In conclusion, if you are on a budget traveling, taking a bus will be a good option for you. But if you want to move faster and more comfortably, but flying is not on the table, renting your own private taxi will be the best option for you. Also, it is surprisingly not that expensive if you chip in with fellow travelers. Click here to find more details for private taxi service from Chiang Mai.

Last but not least, don’t forget to visit Trazy.com for more travel tips and ideas for your next trip to Thailand!

The Ultimate Guide to Renting a Pocket WiFi in Thailand