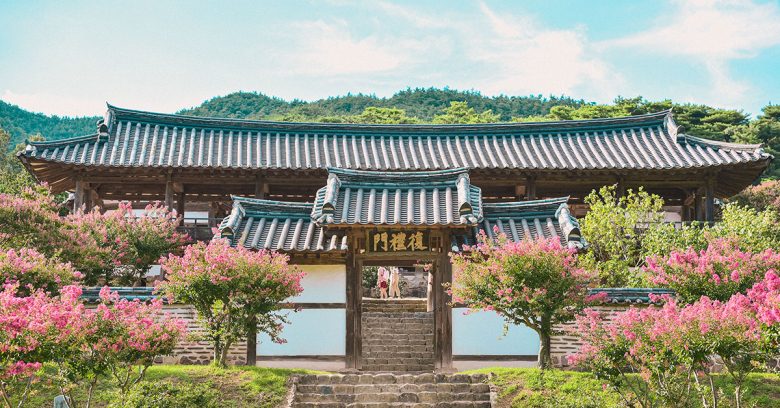 The KTX-EUM line is finally open to the public.

KTX-Eum is the first eco-friendly multiple-power unit train to launch in Korea. This makes it possible for more passengers to be on board and for the train to slow down and speed up faster.

In other words, you can get to your destination much more safely and efficiently than before.

This high-speed train can take you all the way to the East Sea via the Gangneung Line, Chungju via the Jungbunaeryuk Line, and even Andong via the Jungang Line.

This means, what usually takes around 4 hours from Seoul to Andong takes a brief 2 hours. Basically, you’re looking at a day trip to and from Andong.

If you’re looking for somewhere unique to visit in Korea, check out these places in Jecheon and Andong which are easily accessible via the newly opened KTX-Eum line.

1. Places to Visit in Jecheon

Halfway along the route to Andong lies Jecheon, a scenic city full of nature’s wonders in North Chungcheong Province. Via the KTX-Eum train, it’ll only take you about 56 minutes to get there.

An airfield wouldn’t be a typical destination you would visit as a tourist. However, this place may seem familiar to some. If it doesn’t, you’ll be booking your KTX tickets as soon as you hear this anyways. Jecheon is the filming location for BTS’ music video “Young Forever”!

Even if you’re not an ARMY, Mosan Airfield is still a great place to visit, with the tarmac making it perfect for peaceful walks. What’s more, both sides of the tarmac are lined with a field of beautiful flowers – usually Sunflowers in the Summer and Vervain and Zinnia in the Fall – to make it even more magnificent.

Another fun fact about Jecheon is that it’s famous for its amazing cuisine. Having been home to one of the main herb medicine markets during the Joseon Dynasty, you’ll be sure to discover a handful of restaurants with a variety of dishes that include medicinal herbs that are as healthy as they are tasty. So, if you’re in Jecheon, don’t forget to hop onto a Gastro Tour to try out all the amazing dishes.

What better way to take in the pristine views of nature than on a cable car ride across a lake? Cheongpung Cable Car, which spans 2.3km from Multe-ri in Cheongpung to the top of Bibongsan Mountain, will grant you an amazing bird’s-eye-view of Jecheon Lake and the surrounding mountains. Once you’re at the peak, you’ll find an observation deck where you can sit down for a cup of tea or dine with the picturesque scenes of nature right before your very eyes.

Jecheon Central Market, as its name suggests, is located in the very heart of Jecheon. From clothes to fresh produce, you can find anything you need at this local market. It’s a great place to buy tidbits and souvenirs for your friends and family but before you do all that, make sure to try the spicy fish cakes which are one of the most popular local snacks there!

The body of water, Uirimji Reservoir, was created during the Three Kingdoms Era and due to its historical significance, is one of the most famous reservoirs in Korea. With the forest and pavilions dotting the sides of its banks, Uirimji Reservoir offers a picturesque landscape that is a sight to behold. In the summer, you can even bask in the center of its pristine beauty by renting a boat and paddling across the clear blue lake.

Take the time to rest your body and soul with a relaxing trip to Boncho Dadam, a foot bath cafe. It’s probably going to be a much-needed pitstop if you’ve got a jam-packed itinerary. With your feet soaked in a warm bath and a cup of hot traditional tea in one hand, enjoy the serenity with a magnificent window view of nature from right inside the cafe. How relaxing is that!

2. Places to Visit in Andong

At the end of Jungang Line on the KTX-Eum train, you’ll arrive at the capital of North Gyeongsang Province – Andong. Known for its rich culture and traditions, you will have probably heard of Andong for one of the biggest traditional festivals held in Korea – the annual Andong Folk Festival.

Listed as a UNESCO World Heritage Site since 2010, the Andong Hahoe Folk Village is a unique part of not only Andong but also Korea. A lot of effort has been put into preserving the various cultural heritages. Thus, you can still enjoy much of the culture from centuries ago such as the Hahoe Byeolsingut Mask Dance Play. However, if you want to truly immerse yourself in the traditional culture of Korea, several places offer accommodations in Hanoks, traditional Korean houses.

She is said to have tried traditional stamp making at Bukchon Hanok Village in Seoul and watched a performance of the traditional Korean totem pole in Andong /Jangseung and Sotdae making, another crucial part of Korean folk culture, during her visit.

Woryeonggyo Bridge, the longest footbridge made of wood in Korea, is a beautiful place to visit. Meaning “shadow of the moon”, this bridge becomes even more magnificent at night. Moreover, with the Woryeongjeong Pavilion at the center, the whole bridge lights up at night in a myriad of colors. What’s more, an amazing fountain show is put on three times a day, making it a sight to see.

If you’re feeling a little adventurous, you can even enjoy a tranquil boat ride along the Nakdonggang River, either in a moon boat or a traditional Korean boat!

Andong jjimdak is probably one menu you’ve heard about and tasted without having been to Andong itself. Though the origin of Jjimdak has not been proven, it’s worth visiting Andong Jjimdak Street & Old Market, located in the Andong Old Market, to taste it for yourself. Known also as Gusijang, Tteokbokki Alley and many more names, this other market in Andong is a beloved destination for all foodies alike.

As mentioned before, Andong is brimming with tradition and culture from the past. Another UNESCO World Heritage you should visit is Dosan Seowon. Built in memory of the Korean Confucian scholar Yi Hwang, by his disciples, Dosan Seowon served as a private Korean Confucian academy during the Joseon Dynasty. Though it no longer has the purpose of an educational compound, it still serves as a site for commemorative ceremonies and lives on as a piece of living history.

A Korean Buddhist temple located on the slopes of Mt. Cheondeung, Bongjeonsa Temple is a temple with a long and rich history. Moreover, as another UNESCO World Heritage Site, you’ll be able to see that it has been preserved with much care over the years. It is also one of the oldest wooden buildings in Korea and even the late Queen Elizabeth II was said to have been impressed by its grandiose scale and beauty.

This location may seem familiar to some. After appearing in the popular drama ‘Mr. Sunshine’ in one of its most iconic scenes where Go Ae-Shin professes her love for Eugene Choi, Manhyujeong Pavilion has become quite a popular tourist attraction. Nonetheless, with its name meaning “a bridge for resting a thousand years”, the pavilion still offers a tranquil and picturesque setting for a relaxing day out in nature.

Are you ready to hop onto the KTX-Eum train for a day trip to Jecheon or Andong? There’s so much to discover!