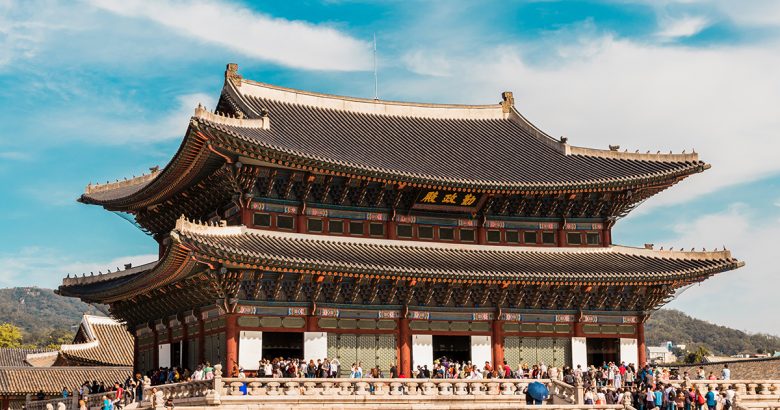 If you are in Seoul, you cannot leave the city without visiting at least one of the grand palaces! They are all concentrated in the center of Seoul, Jongno-gu & Jung-gu, so you can easily explore these palaces. Learn more about the five palaces and also find out the fun activities you can enjoy nearby.

Gyeongbokgung Palace is the largest palace out of the five grand palaces in Seoul. Established in 1395, it is commonly referred to as the “Northern Palace” because it is located in the furthest north of Seoul compared to the neighboring palaces, Changdeokgung and Gyeonghuigung.

The entrance fee to Gyeongbokgung Palace is only 3,000 won for people from 25 to 64 years old. If you rent a Korean traditional attire, hanbok, and wear it to the palace, the entrance is free of charge.

Check out the activities around Gyeongbokgung Palace:

Deoksugung Palace is a small palace located near City Hall Station in Seoul. It’s also famous for its stone wall road. It used to be a place for Korean Empire after the Joseon Dynasty. The changing of the Royal Guard is a popular event that many visitors come to watch.

The entrance fee is only 1,000 won for those who are from 25 to 64 years old. There is the National Museum of Contemporary Art inside the palace where you can enjoy the exhibitions. You have to pay an extra fee for the exhibition. You can enter the palace for free if you wear hanbok like Gyeongbokgung Palace!

Check out the activities around Deoksugung Palace:

Changdeokgung Palace is a UNESCO Cultural Heritage and it’s a palace where kings used to stay the longest. There is a Secret Garden called ‘Biwon’ within Changdeokgung Palace, which is renowned for its beautiful garden. The best time to see the garden is during the spring and fall since you can witness the stunning red plum blossoms or orange autumn foliage.

The entrance fee for adults of more than 18 years old is 5,000 won and for youth from 7 to 18 years old is 2,500 won. Moonlight Tour at Changdeokgung Palace is also something that you shouldn’t miss out on. You’ll be allured by the magical dazzling lights of the palace and the garden at night!

Check out the activities around Changdeokgung Palace:

Changgyeonggung Palace was built in 1483 by King Sejong for his retiring father, King Taejong. During the special public holidays in Korea, such as Chuseok (Korean Thanksgiving Day), the palace hosts traditional games and activities for visitors.

During the Japanese colonial period, it became a park with a zoo and a botanical garden in 1909. It’s called Grand Greenhouse, which is Korea’s first greenhouse designed in a Western architectural style. It was restored in 2004 and open to the public so that people can enjoy different types of plants.

Check out the activities around Changgyeonggung Palace:

Gyeonghuigung Palace was built in 1620 and served as the residence of kings for 28 years since 1624. It was officially recognized as a royal villa during the Joseon Dynasty. Unfortunately, most of them were burnt down during the Japanese colonial period. The Seoul city government decided to restore the palace in 1985, however, only 33% of the former palace was reconstructed because there wasn’t much space left due to the urban growth.  You can enter the palace for free.

Check out the activities around Gyeonghuigung Palace:

Check out more latest, trendiest, and newest things to do in Korea on Trazy.com, Korea’s #1 Travel Shop!

The 10 All-Time Favorite Parks in Seoul Among Seoulites